Hey guys, Brian from tooFab here. We're going to try something new today -- because I hit up the "American Idol" finale and wanted to tell you about what you didn't see on the show. 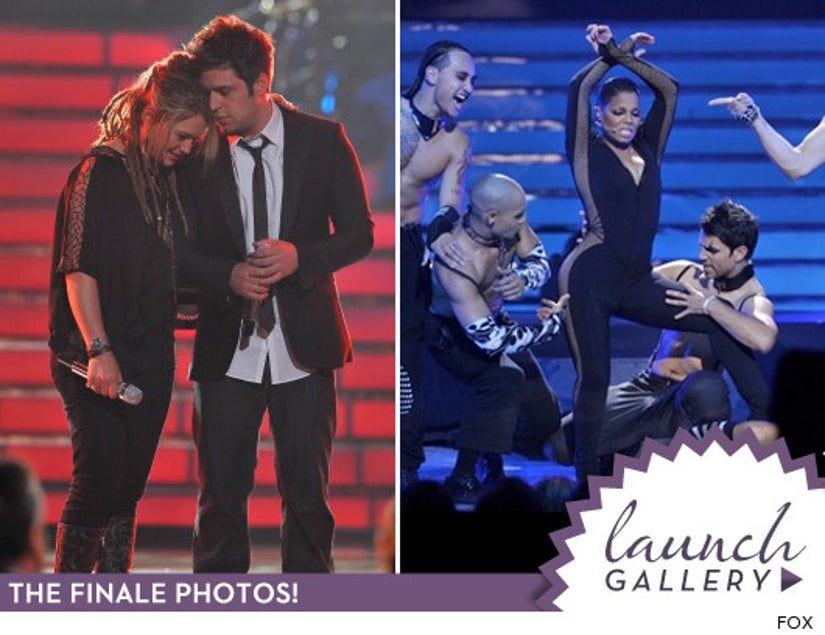 After straining to see past hundreds of tweens camped outside of the Nokia Theater to see former "Idol" contestants like Kristy Lee Cook and Kimberly Caldwell walk the red carpet, my friend Josh and I decided to go inside and wait -- and the show was well worth it!

Having no idea what the word "LOGE" meant on ourtickets, we were surprised to find ourselves in an awesome box to theleft of the stage. We couldn't really see the celebs walking in fromour vantage point -- except for Carrie Underwood, which, yay!

After some pre-show hype from a guy in a sparkly tie named Corey, Ryan Seacrest, Crystal Bowersox and Lee DeWyze hit the stage -- and the countdown started. 5-4-3-2-1 ... sike!

Debbie the stage manager was wrong, and there was still another minute 'til showtime.

The audience went absolutely insane when Bret Michaels creeped onstage during Casey James' performance of "Every Rose Has Its Thorn" -- and he definitely got the strongest applause of the night.

Michaels kept telling Casey "That was awesome" after -- and took time to shake hands with fans up front during the break.

Though they thankfully cut to commercial on the telecast, Ian Benardo kept his schtick up after yanking the mic from Dane Cook ... and eventually had to be told to leave the stage by a security guard.

Some cute moments: Paula Abdul sat on Simon Cowell's lap while the Idols sang their tribute to him, a cute little girl named May hugged Ellen DeGeneres and Kara DioGuardi and got a free iPod from Corey during a break, and Crystal looked beyond excited after performing with the amazing Alanis Morissette.

Crystal and Lee walked out on stage and hugged a couple times beforethe show came back from commercials to announce who won. When Seacrestread Lee's name, the place went nuts.

Though he was cut off during his performance of "Beautiful Day,"DeWyze hugged the judges after, gave Simon a special shout-out into themic and addressed the entire audience -- thanking everyone for theirsupport before being whisked offstage for his first post-"Idol"interview.

As someone who hasn't really watched this season at all, being at this show was incredible. Janet Jackson, Christina Aguilera, Alanis Morissette were amazing ... and I made my dad jealous by seeing Chicago, Hall & Oates and the Bee Gees.

Both Lee and Crystal sounded great in the auditorium -- and, not goinginto the show Team Bowersox or DeWyze, I would have been happy witheither result.