By TooFab Staff | July 14, 2010 1:44 PM
Bret Michaels is shooting down reports that he and on again/off again girlfriend of 16 years, Kristi Lynn Gibson, are engaged -- and claims that the big rock we've been seeing on her finger is simply a "promise ring." 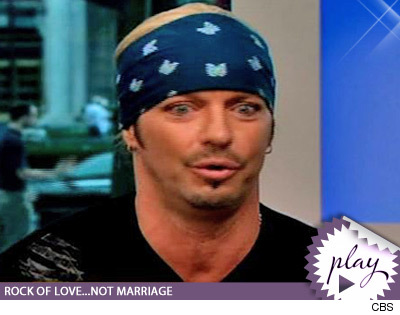 Michaels was on the CBS "Early Show" this morning, where he said that rumors of him proposing to Kristi over 4th of July weekend were untrue -- but added, "She's a beautiful woman, she's strong, and I love her."

As far as marriage plans go, Bret says it's a "work in progress."

Kenya Has Awkward Run-In with NeNe; Cynthia Concerned Over Infidelity

Amanda Bynes Opens Up About Her 'Controversial' Conservatorship

Rihanna Calls for Allies to 'Pull Up' at NAACP Image Awards

IHOP's Feb. 25 National Pancake Day 2020 Deal Includes Free Food & More If You Like Clever Things, These 39 Products On Amazon Will Fascinate You This Video Of Kim Kardashian Trying Improv Comedy Takes Her Out Of Her Comfort Zone