By TooFab Staff | October 12, 2010 3:25 PM
Reality TV star-turned-jewelry designer Brittny Gastineau is following in the footsteps of Carrie Underwood and Hilary Duff: She too, has now landed herself a hunky hockey player! 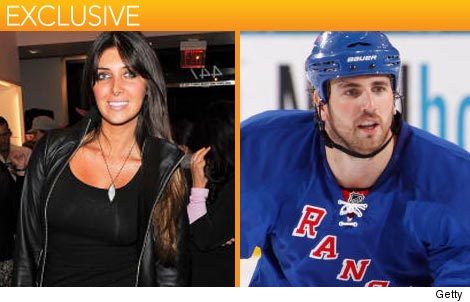 “They looked like they were on a really hot date,” an eyewitness tells TooFab. “They were having a great time, talking and laughing. And they were very cozy with each other.”

This isn’t the first high-profile hookup for the hunky hockey player— who weighs a hulking 215 pounds and stands at 6'4"—that most recently dated a fellow Canadian, model Jessica Stam. And he’s no stranger to the drama of a high-profile relationship: Last May, Lindsay Lohan reportedly tossed a drink at Stam at a New York City nightclub, and Lohan followed up by trying to get Stam and Voros booted from the club.

This week seems to be a period of change for the Canadian-born hockey player: Aside from stepping out with Gastineau, the former New York Rangers player made his Anaheim Ducks debut this past Saturday -- a much easier commute for a possible budding long-distance relationship.

Dorinda Medley Unloads on Tinsley Mortimer -- 'You Bore Me!'

Ronnie and The Situation Bond Over Rehab on Jersey Shore: Family Vacation

Nikki Bella on Artem Chigvintsev Losing His DWTS Job, 'Freaking Out' Over Quick…