The Grammy Award nominees were announced last night -- and this year, Eminem is leading the pack with 10 noms! 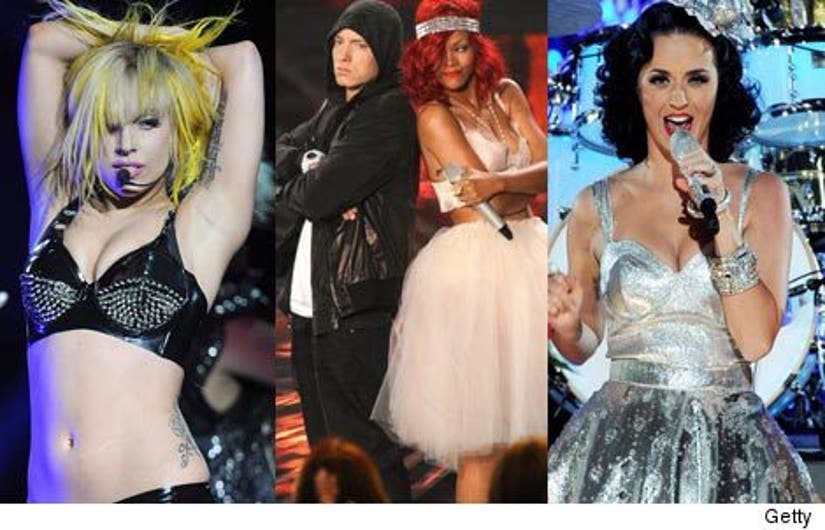 Em is up for Album of the Year for his "Recovery," going head to head against Arcade Fire's "The Suburbs," Katy Perry's "Teenage Dream," Lady Antebellum's "Need You Now," and Lady Gaga's "The Fame Monster."

"Glee" also nabbed two noms -- one for their performance of "Don't Stop Believin'" from Regionals and another for Volume 1 of the show's soundtrack. Other multiple nominees included Bruno Mars, who got 7, as well as Lady Gaga and Lady Antebellum -- who each got 6.

Song of the Year:
"Beg Steal or Borrow," Ray LaMontagne
"F*** You," Cee-Lo
"The House that Built Me," Miranda Lambert
"Love the Way You Lie," Eminem ft. Rihanna
"Need You Now," Lady Antebellum

Best Male Pop Vocal Performance
"Haven't Met You Yet," Michael Buble
"This Is It," Michael Jackson
"Whataya Want From Me," Adam Lambert
"Just the Way You Are," Bruno Mars
"Half of My Heart," John Mayer

For the full list of nominees, check out Grammy.com.