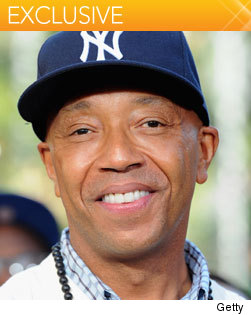 Russell Simmons'  burgeoning multimedia empire is huge and keeps him as busy as ever, but the mogul tells TooFab that juggling co-parenting with ex-wife Kimora Lee Simmons is a breeze.

"Co-parenting is not hard because the mother is excellent," Russell, who has daughters Ming Lee, (who turns 11 on Friday), and Aoki Lee, 8, with Kimora, tells TooFab. "We have businesses together, we have partnerships together, we have Simmons jewelry, and we have kids--the most important thing we have is kids."

Russell, who married Kimora in 1998 and separated in 2006, just released his book "Super Rich: A Guide To Having It All." So is this book all about having it all? Not quite. "The meaning of 'Super Rich' is having nothing, which is also incidentally one of the better definitions for yoga, state of yoga which is the union of God or pure bliss, which is the state of needing nothing."

The book, which features a chapter called 'Business Yogi,' merges yoga philosophies with business principles. "I just love yoga, I practice everyday. And I meditate every day," Russell tells TooFab.  In the nearly 200-page book, Russell suggests rethinking the notion of being prosperous, and encourages people to give back. He also encourages his readers to live a life full of self-acceptance, and without regrets.

As for what he's hoping for in 2011, Russell says, "More peace, more tolerance. I'm the chairman of The Foundation for Ethnic Understanding, and I'm finding that people are less tolerant this year than last year, and for ten years, my research showed there was more tolerance, so it's a very interesting twist."

How Stars Are Paying Tribute to Kobe Bryant at 2020 Grammys

The Legacy Kobe Bryant Leaves Behind

Kobe Bryant's Daughter Gianna Ready to Carry on His Legacy