Fashion By TooFab Staff | February 10, 2011 12:11 PM
Lady Gaga is next month's Vogue cover girl -- where she shows off some very high-end couture while leaking details about her next album, the highly anticipated "Born This Way." 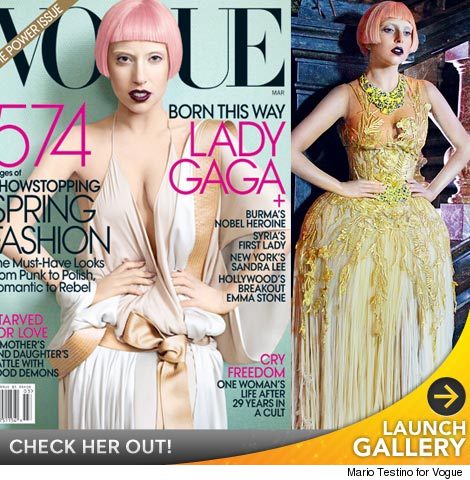 Gaga, who wears some gorgeous gowns from Alexander McQueen, Louis Vuitton and Haider Ackermann for the shoot, also sports a short pink wig for the March cover.

Of her new single "Born This Way," which drops first thing tomorrow morning, Gaga tells the magazine “I wrote it in ten f**king minutes and it is a completely magical message song. And after I wrote it, the gates just opened, and the songs kept coming. It was like an immaculate conception.”

The reporter for Vogue got some insight into other songs on the album too, which includes track titles like "Judas," "Americano," “Hair,” “Bad Kids,” and “Government Hooker.” Gaga adds that the album has hints of Bruce Springsteen and Guns N' Roses and is "much more vocally up to par with what I’ve always been capable of. It’s more electronic, but I have married a very theatrical vocal to it. It’s like a giant musical-opus theater piece.”

Good, Bad and WTF: The Most Memorable Met Gala Looks of the Decade

Kim and Kylie Get Candid During Makeup Session