Trudie Styler and husband Sting star opposite each other in the play "Twin Spirits," which is making its West Coast debut in L.A. Tuesday night, but Styler says working together hasn't added any additional strain to their marriage. And when they need alone time, it's all about the hotel rendez-vouz! 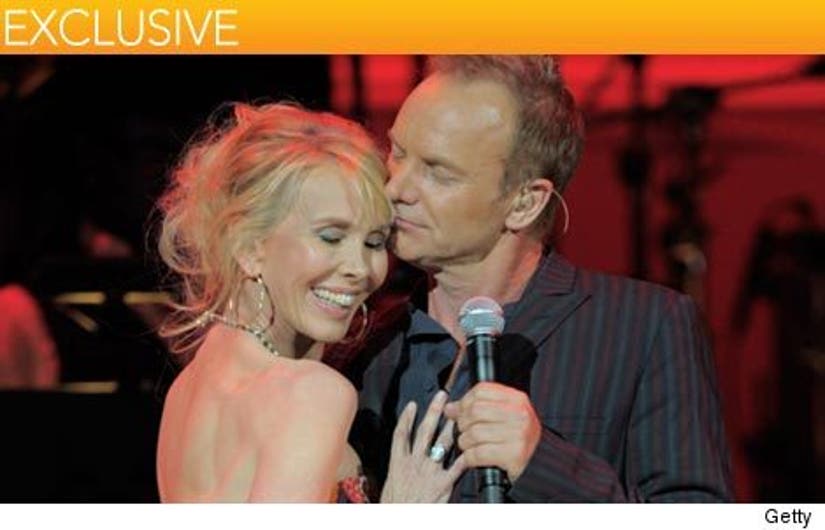 "We've done this show a few times now, this is probably our sixth performance," Styler tells TooFab of "Twin Spirits," which had a staging in New York. "But we don't work together very often. I have really nothing to do with the music business. I make films, so when we do work, we love doing this."

In "Twin Spirits," Sting plays classical composer Robert Schumann, and Styler plays his pianist wife Clara. Sting and Styler read the couple's letters, with accompaniment from a six-member ensemble of musicians. "It's such a delightful piece, we love the music. For someone who is completely a musical dunce, it was an interesting thing to prepare for! The evening is told through her letters, his letters and through their music, and through the songs that they wrote."

As for how Styler and Sting keep their relationship going strong, she tells TooFab, "Well, he goes on tour a lot, and there's something in that. Having space from your partner sometimes is very good. I think you have to keep it all fresh. So we have wonderful reunions in hotels, and there's an inherent romance in that."

Styler adds, "The danger of a long term relationship is that it can become a bit like an old shoe. We really like each other enough to want to have conversations that may not be easy sometimes. It's been going on for thirty years, so I hope it goes for another thirty!"