The audience was left gasping at Kirstie Alley's routine on "Dancing with the Stars" last night -- when partner Maksim Chmerkovskiy dropped her at the beginning of their dance. 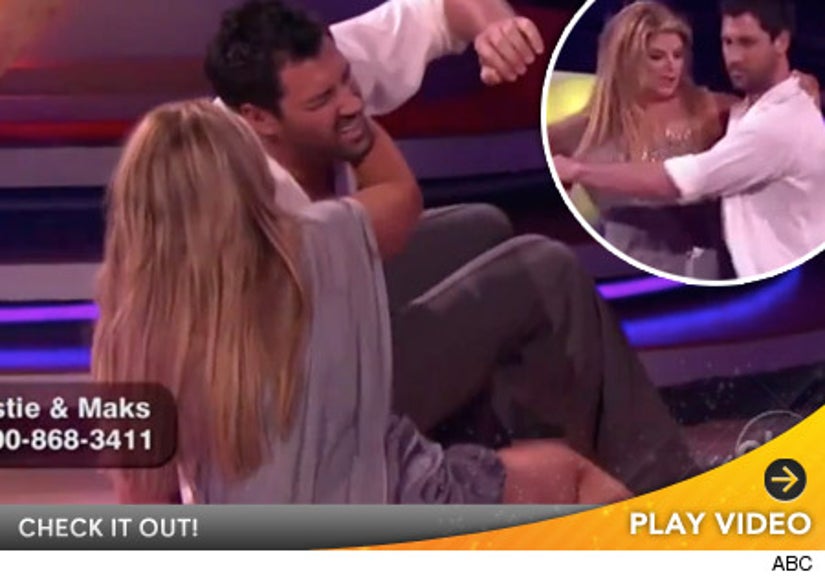 The contestants were asked to pick a song with an emotional meaning while talking about their past for their routines last night. Alley chose to talk about her mother's death with a rumba set to "Somewhere Over the Rainbow."

At the beginning of the number, Maksim's leg gave out and they both fell to the floor. The two recovered nicely after and were still given a 21/30 for the night by the judges.

After the dance, Maksim told the judges "My thigh just gave out. I'm so sorry. I'm so sorry. It has nothing to do with her." This morning on "Good Morning America," Maksim said a "charlie horse" led to the accident.

The performance would put them in the middle of the rankings last night, tying with Chris Jericho and Ralph Macchio.

Hines Ward and Petra Nemcova lead the pack with 25/30, Chelsea Kane and Kendra Wilkinson followed with 23/30, Lil Romeo and Sugar Ray scored 20/30 and Wendy Williams came in last with 15/30.

Come back tonight to see who gets eliminated!