Things got a little awkward on "American Idol" last night, when Casey Abrams singled out Jennifer Lopez while singing Maroon 5's "Harder to Breathe" -- and ended the song by kissing her on the cheek!

No word on if J.Lo knew it was coming, but she gave him rave reviews after, telling the audience "Casey's got soft lips. I loved it -- The performance!" 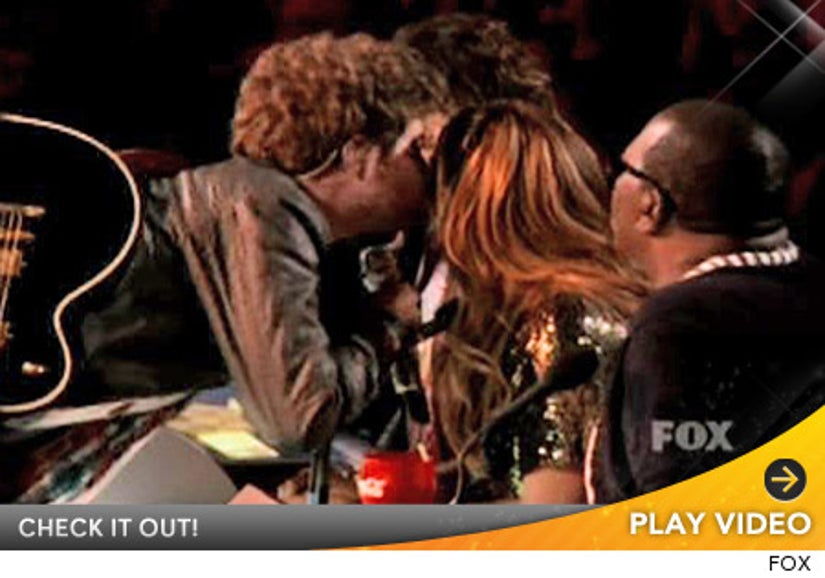 - Jacob Lusk dedicated Luther Vandross' "Dance with My Father" to his own father, who passed away when he was 12-years-old. Randy told him after it felt like he was holding back.

- James Durbin sang his highest ever on Muse's song "Uprising" -- and said he went up an octave because the band's singer, Matt Bellamy, pretty much dared him to.

- Haley Reinhart tackled Adele's current hit "Rolling in the Deep," with J.Lo telling her "I thought you really shined." Randy added she went in the "perfect direction" for her.

Also: Lauren Alaina was told to take bigger risks after singing Sara Evans' "Born to Fly," Stefano Langone showed off some dance moves during his performance of Ne-Yo's "Closer" and Scotty McCreery did country once again with LeAnn Rimes' "Swingin'"

Who do you think should go home tonight?