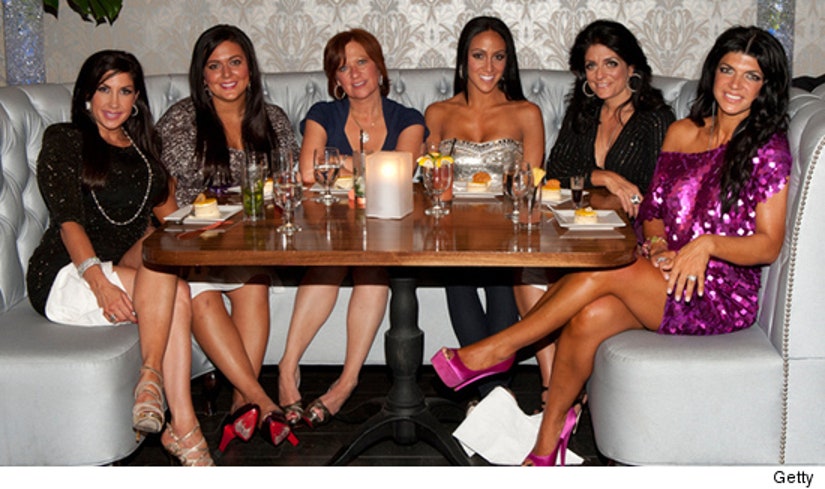 Melissa Gorga may have sometimes dress like a stripper, but according to her, she never was one!

Rumors started swirling this week that the "Real Housewives of New Jersey Star" used to work as an exotic dancer back in the day at a place called Lookers, after being ambushed on camera by her former boss at the taping of the show's reunion episode.

According to Us Weekly sources, Gorga's sister-in-law Teresa Giudice had a hand in the set-up but was seen comforting Melissa during the taping.

Gorga took to her blog last night to clear up the rumors, blasting any claim she once danced topless.

"There have been a lot of rumors floating around over the last few days that I want to clear up. As everyone knows we are filming season 4 so there is not too much I can confirm, but there is one thing that I would like to clarify...the accusation that I was once a dancer at a strip club. This is 100% NOT TRUE. I did bartend for a few weeks at a bikini bar while I was in college. My outfit was a tank top, shorts and sneakers. SORRY, no bubbies there. You will have a better chance at seeing some nudity on the episode this Sunday. Thanks to the always shy Joe Gorga!"

She then addresses the set-up ... but doesn't mention Teresa by name, writing:

"The reason I am so adamant about clearing this up is because people are making false accusations solely to hurt me and my family. Someone desperately wants to knock me down and prove that I have something to hide, but then tries to cover it up by putting the blame on production. I have been happily married to my husband for 7 years and we have 3 beautiful children. Even if I had been a dancer, I do not know why anyone would care 10 years later."

Question is, do you believe her? Sound off below!