The claws came out on "The Real Housewives of Beverly Hills" Monday night, when new cast member Brandi Glanville took on sisters Kim and Kyle Richards at what was supposed to be a fun game night at Dana Wilkey's home.

Glanville -- the ex-wife of Eddie Cibrian -- had made a bad first impression on Kyle the week before at Adrienne Maloof's barbecue with her frank sex talk. Kim had arrived at Wilkey's home already "tired" and "anxious," requiring multiple trips to the bathroom to freshen up.

The three women were assigned to the same team, but Kim told Kyle she didn't want to play with Brandi. The Richards sisters further excluded Brandi by offering up clues only the other would know. A frustrated Brandi called them out on their "mean girl" behavior and Kim's frequent trips to the bathroom, and this is the drama that ensued: 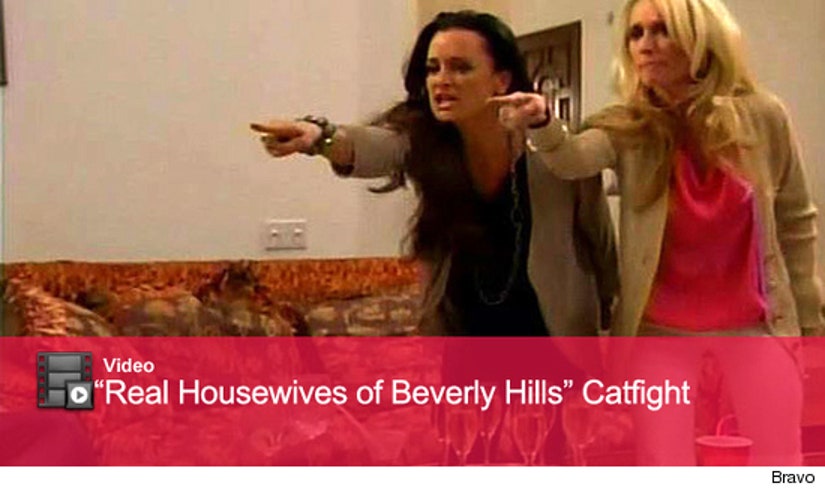 Kyle went on Ryan Seacrest's show this morning to explain the situation. "I looked so mean, I swear I'm not a mean person," the brunette Richards said. "The group dynamics are so tense that it really can bring out the worst in you."

"It's so upsetting to me. I actually cried for 24 hours, [the footage] bothered me so much. I apologize to Brandi and I apologize to anybody I've let down." Richards also added things get worse before the get better with newcomer Glanville.

Co-star Lisa Vanderpump just chimed in on Twitter too, adding "Hey ....everybody give @KyleRichards18 a break,too much bashingEVERYBODY has an off night,none of us are perfect you just get to witness it."

Did Kim and Kyle overreact on game night? Was Brandi pushing their buttons too hard? Tell TooFab in the comments below!