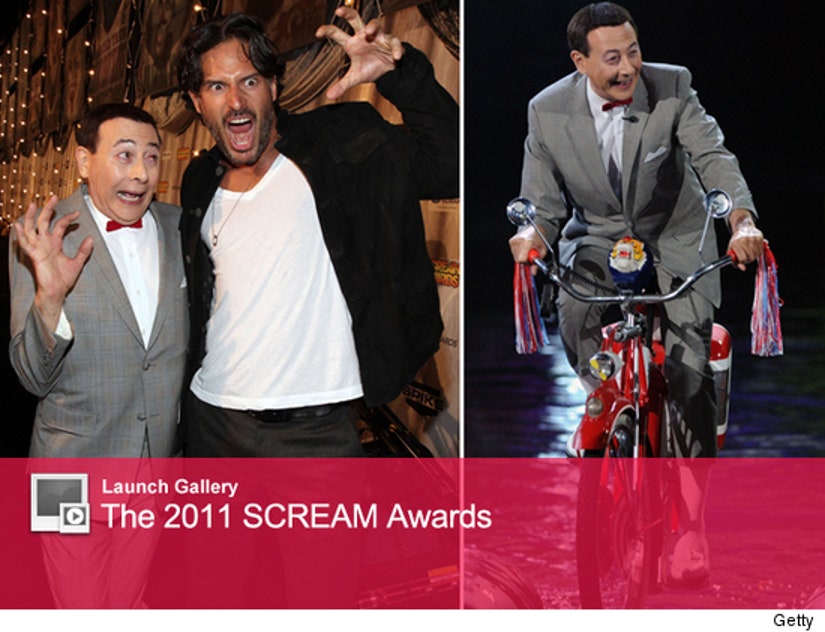 It may have been an awards show packed with mutilation, superheroes and sci-fi sirens, but the real star at Spike TV's SCREAM 2011 awards last night Pee-wee Herman and his big red bike.

We were on the black carpet for the show on Saturday night, where Paul Reubens walked down the entire line in character -- speaking to every single reporter there.

For the record, most the night's biggest celebs (Robert Downey Jr., Mark Wahlberg, Anne Hathaway, Colin Farrell, Bradley Cooper, Kate Becksinale) didn't walk the carpet at all -- and a lot of the others who did only did about half of it.

Pee-wee, who was accepting the Visionary Award, told us "I'm gonna have to clear some space on my shelf for another award. I guess you could have worst problems, right?"

As for the upcoming Pee Wee movie, he said "I could tell you the whole plot ... No! Not. I can't tell you anything about it yet, sorry. I wish I could. I would love to, it's really funny!"

Other winners last night included "Harry Potter and the Deathly Hallows -- Part 2" for The Ultimate SCREAM, "The Dark Knight Rises" for Most Anticipated Movie, Darth Vader for Ultimate Villain and Nicolas Cage for the Maverick Award.

Find out who else nabbed an award and who killed it on the black carpet in the gallery above -- and tune in when the SCREAM Awards air October 18 on Spike TV, VH1 and VH1 Classic.