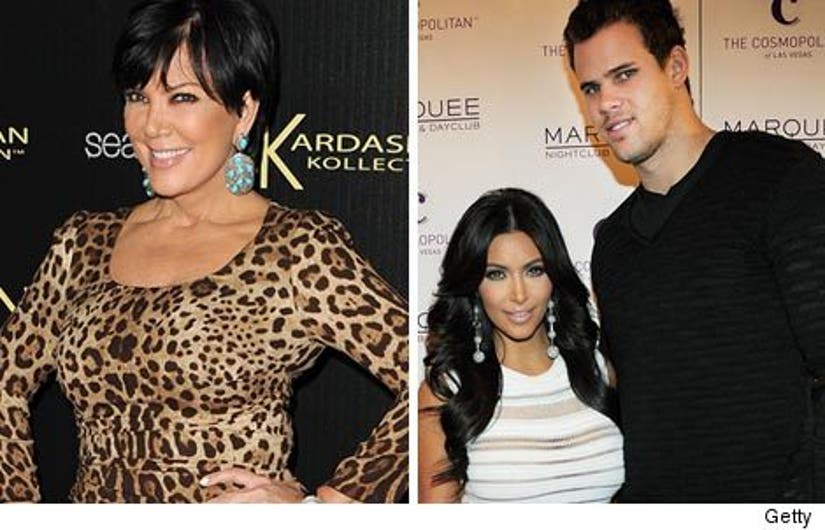 Maybe "Kim Kardashian's Fairytale Wedding" wasn't as profitable as we all thought.

Kim's mom, Kris Jenner, hit the radio circuit this morning to address her daughter's divorce from husband of 72 days Kris Humphries -- and shot down rumors the former-couple profited from their TV wedding.

"Kim had to make a very difficult decision," Jenner told Johnjay and Rich (via Us Weekly) earlier today. "Whatever her decision was at the time, I'm just here to support her as her mom and make sure she's okay today."

As for reports that Kim and Kris made money off of their televised nuptails, which E! had the exclusive rights to, Kris says Kim "didn't make a dime." Jenner adds, "She actually spent millions of dollars on this wedding, so it's not something that she thought would ever not be happily ever after."

And all those wedding gifts all her friends and family sent? Well, there's this: "I'm sure Kim will make a ginormous donation, as she does all the time anyway, very quietly, to a wonderfully deserving charity or children's hospital or something like that," Kris explained.

Kim echoed her mother's statements in a blog posted on her website Tuesday afternoon. "I'm so grateful to everyone who took the time to come to my wedding and I'll be donating the money for all the gifts to the Dream Foundation."

The reality starlet also wrote, "First and foremost, I married for love. I can't believe I even have to defend this. I would not have spent so much time on something just for a TV show! I share so much of my life on a reality show, that contemplating whether to even film my wedding was a tough decision to make."

How much of the Kardashian Kool-Aid are you drinking? Believe her? Sound off below!