Rockers and models have a long history, from George Michael's "Freedom" video to the myriad of musican-model couples (David Bowie and Iman, Mick Jagger and Jerry Hall, Seal and Heidi Klum, to name a few).

The two worlds come together in the December issue of Harper's Bazaar U.K. Five supermodels -- Naomi Campbell, Cindy Crawford, Eva Herzigova, Helena Christensen and Yasmin Lebon, collectively called the "Supers" -- team up with the four band members of Duran Duran for the first-ever magazine cover shoot to take place within the filming of a music film -- "Girl Panic!"

Click on the "Launch Gallery" button below to see the five "Supers" portray the rockers and read on for more about the historic collaboration. 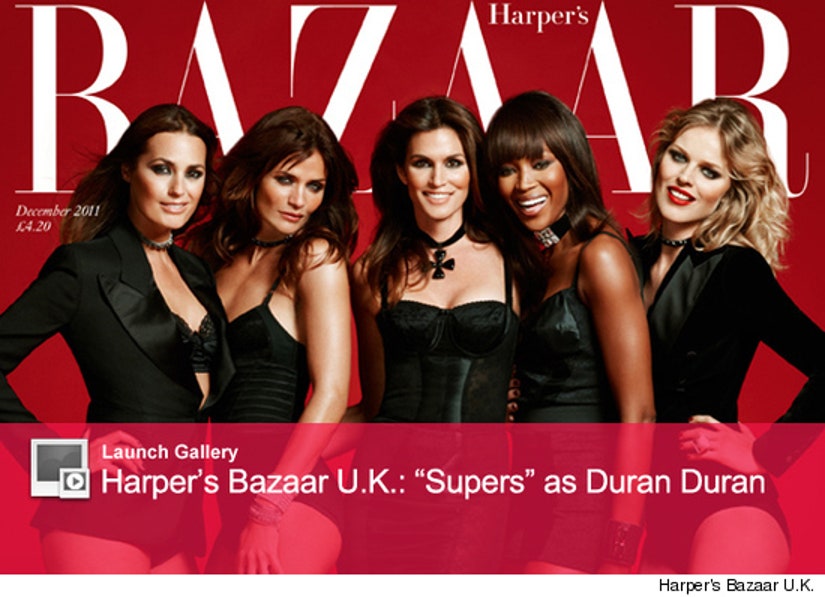 "Girl Panic!" is Harper's Bazaar and Duran Duran's exclusive film and magazine project in association with Swarovski Elements. The feature was photographed by Jonas Akerlund and styled by Vanessa Coyle of Bazaar U.K. Shot in London's Savoy Hotel last June, the reunion of the "Supers" created a huge stir in the fashion world.

The members of Duran Duran couldn't be more excited about the project.

Keyboardist Nick Rhodes described the process: “Harpers had approached us about collaborating with the magazine on something really special when the new album came out. I'd had had this crazy idea for a video for the song 'Girl Panic!,' that looked fantastic on paper, but that I thought in reality would be impossible to pull off. The idea was to recreate a day-in-the-life of the band, with five of the world's greatest supermodels playing all of us. [U.K. Editor] Lucy loved the idea of doing a cover shoot within the video itself – and so it all began.”

Lead singer Simon Le Bon added: “We have made some pretty ambitious videos over the years, but this one was certainly the most challenging to date. Coordinating the schedules of five of the world's biggest super models, Jonas, and the band was no easy task -- but we couldn't be happier with the finished film. It has all of the ingredients that we feel are important -- it's humorous, glamorous, sexy and very Duran Duran.”

The full 22-page feature appears in the December issue of Harper's Bazaar U.K., on sale November 3. Visit the Harper's website to get an exclusive glimpse of "Girl Panic!"