Note: The livestream of the "Breaking Dawn" just ended, but come back to toofab in 15 minutes for photos of the entire cast, including Robert Pattinson, Kristen Stewart and Taylor Lautner! 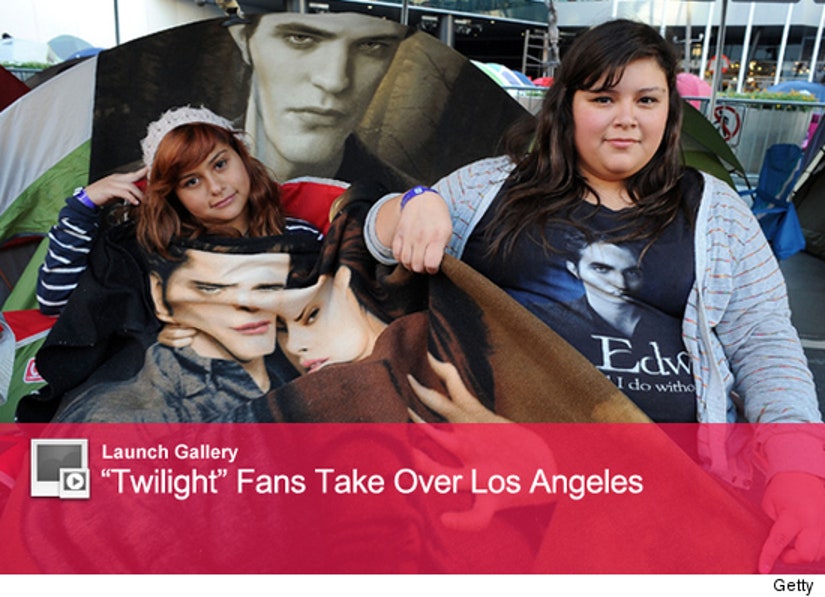 For the last five days, fans -- or should we say fanatics -- of the vampire series have camped outside the Nokia Theater for a chance to see Robert Pattinson, Kristen Stewart, Taylor Lautner and the rest of the “The Twilight Saga: Breaking Dawn -- Part 1” cast at tonight's premiere.

Over the weekend, they were treated with screenings of the first three movies, an appearance from Dr. Carlisle Cullen played by Peter Facinelli, and an outdoor concert with performances from some of the breakout artists featured on the “Twilight Saga: Breaking Dawn -- Part 1” soundtrack.

The center started admitting fans last Thursday, and the diehard devotees reached numbers well into the thousands, each armed with their Twilight inspired garb and gear. The area was cleared out this morning, but the dedicated Twi-hards were given wristbands to comeback for the red carpet arrivals.

One super-fan went so far as arriving to the summit decked out in a wedding dress so she could get her very own nuptial picture taken with a cardboard cutout of Edward at the altar. Another shaved the words "Breaking Dawn" into his hair!

Click the “Launch Gallery” button above to check out all of the super-fans! Then, come back at 8pm ET/5pm PT for live coverage of the "Breaking Dawn" premiere, below!