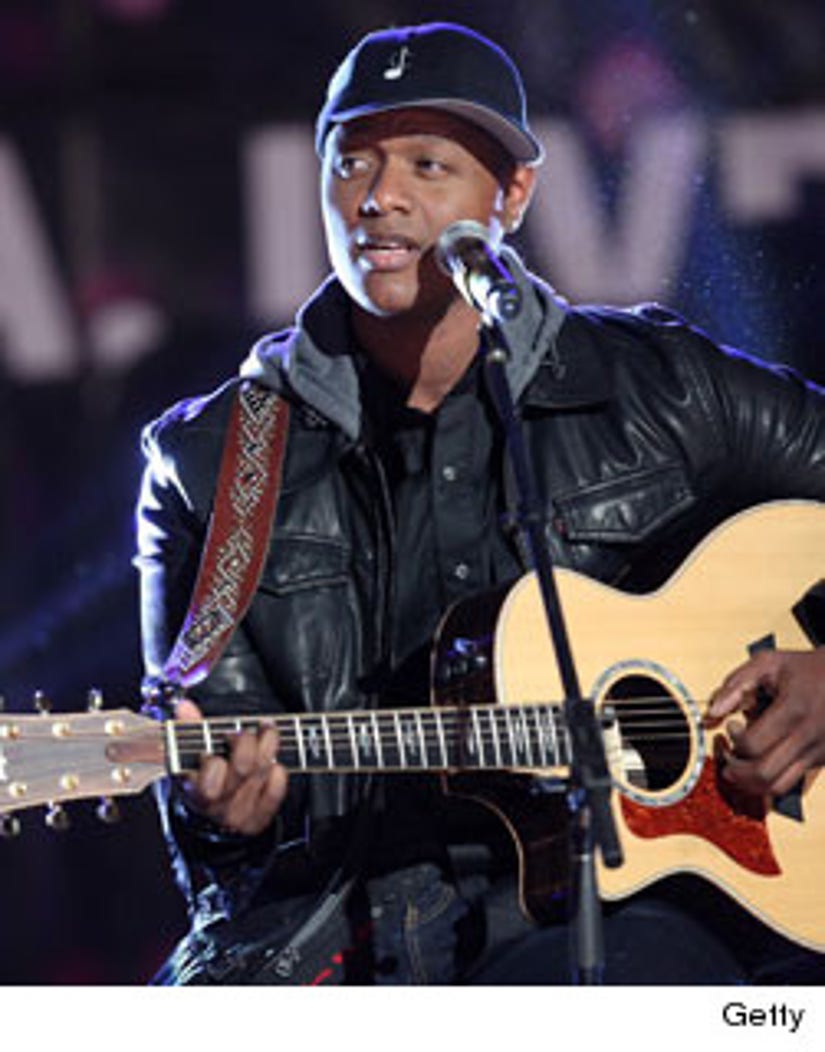 If Adam Levine, Cee-Lo, Christina Aguilera and Blake Shelton are all fighting over you, you know you're something special.

Javier Colon auditioned for the first season of “The Voice” singing Cyndi Lauper's It was evident Colon was a contender from the first note that came out of his mouth. The four judges recognized his talent immediately, all hoping to work with Colon. Adam Levine inevitably was chosen by Colon stating, “I want to win this f----r.”

After 12 weeks of competition, Colon was crowned “The Voice" champion, received $100,000 and a record deal with Universal Republic. He's be featured at many events, including Friday night's 4th annual Holiday Tree Lighting at L.A. Live, where he joined performers like JoJo, Il Volo, and "Idol" alums Pia Toscano, Haley Reinhardt and Casey Abrams. The event kicked off AEG's Season of Giving, which you can learn more about here.

Colon's first post "Voice" CD “Come Through For You” dropped just last month. The album focuses on the hardships of being away from his family and his journey though hardship and success.

Toofab had the opportunity to catch up with Colon, check out the exclusive interview below!

toofab: What inspires your song writing?

toofab: Which track is your favorite on the album?

Colon: The most personal for me is a song called “Echo” it's about leaving home and having to be away from the family and how it happens often and it's almost like a repeating echo, because a lot of times we still have this love for each other and miss each other.

toofab: What was the hardest thing about competing in "The Voice"?

Colon: Family was number one, being away, but also the unknown and not knowing what was going to happen and you just needed to focus on what you can do and what you're going to sound like because that's the only thing I could really control. But being away from my family was one of the toughest things for sure.

toofab: How often would you see your family?

Colon: I would see them every few weeks or so, they would come out. Sometimes it was after a couple weeks but it was probably every three weeks that I saw them, you know when you have little kids you want to see them all the time.

toofab: During "The Voice," all four judges opted to take you as one of their finalists. Which judge did you find the easiest to work with?

Colon: The one that I worked with was Adam, and he was the first to turn around, but I had to choose one and it was Adam and he was the right choice. Even in the beginning he said I want to win this thing and really conveyed to me how much he believed in my ability, and it was the right choice, he was the man for the job. He was a great coach, a great mentor and a great friend. Being amongst 20, 000 people and the being on stage with him singing “Man in the Mirror” is something that you dream about.

toofab: Since you're the 1st winner of the Voice will you come back and perform on this coming season?

Colon: I sure hope so, we have talked about it a little bit and I would love to make that happen if the producers allow me, we will see. I think we are trying to work the details out now.

toofab: Were you at the auditions?

Colon: I did actually stop by this past weekend to check in and I saw Adam and got to meet some of the new contestants, and they are amazing. You know I am going to be rooting for team Adam all the way, but I am excited to see how the season unfolds.

toofab: Will you take part in watching/voting this season?

Colon: Absolutely, I am going to be watching and voting and glued to my TV like everyone else. I am actually looking forward to not being a part of the show and just watching it and being a fan, and not being so connected to everyone involved, so I am excited for that.

toofab: How has your life changed since the show? Are you home more or less?

Colon: It's a mixture, I was home for a bit I was away for a bit, I have been moving around a lot making the album and promoting it. It's something that I am super proud of and I am just excited to be able to get it out there to people.

toofab: As an artist, who do you compare yourself to?

Colon: My style is kind of a mix of James Taylor, John Mayer, Stevie Wonder and Sam Cook, it kind of sounds acoustic with some soul—it's a little bit of everything.

toofab: What artists, dead or alive, would you love to have at a dinner party?

Colon: If I could pick five it would be: Stevie Wonder, James Taylor, Joni Mitchell, Johnny Hathaway and John Lennon.

toofab: You have done a lot of amazing things, what is something you would love to do but haven't yet?

Colon: I would love to win a Grammy at some point that would be the icing on the cake, to be recognized not only for the show but to bring home something like that.

Watch Javier sharing his beautiful voice and Christmas memories from the 4th Annual Tree Lighting at L.A. Live, below!