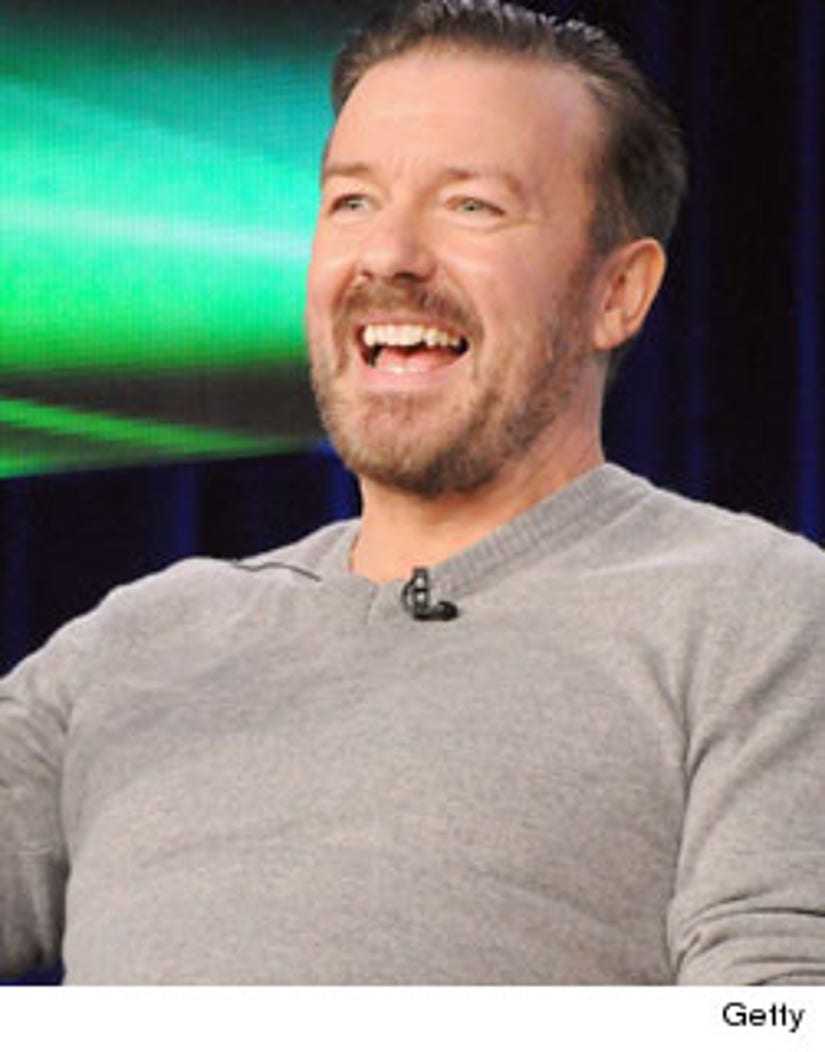 Ricky Gervais will take to the stage on Sunday as host of the 69th Annual Golden Globe Awards. It's the third consecutive year that the British comedian will serve as master of ceremonies for the big night … and it came as a surprise to many that he was invited back after some pretty controversial comments he'd made at shows past.

To prep you for Sunday -- and bring back some happy memories of the past couple Globes -- we bring you Ricky's 10 most controversial Globes quotes! (The views expressed by Ricky Gervais in no way reflect the views of toofab.com, its advertisers or affiliates.)

10. On HFPA President Philip Berk: “Next up, Eva Longoria has the daunting task of introducing the president of the Hollywood Foreign Press. That's nothing! I just had to help him off the toilet and pop his teeth in.”

9. On Steve Carell: “He was a jobbing actor, career not going that well if I'm being perfectly honest, who got his big break when I cast him in a show called 'The Office.' He is now leaving that show, and killing a cash cow for both of us. Please welcome the wonderful Tina Fey, and the ungrateful Steve Carell!”

8. On “The Sex and the City” Ladies: “There were a lot of big films that didn't get nominated this year – nothing for 'Sex and the City 2.' I was sure the Golden Globe for special effects would go to the team that airbrushed that poster.”

6. On plastic surgery: “Just looking at all the faces here reminds me of some of the great work that was done this year ... by cosmetic surgeons. You all look great. I've had a penis reduction ... just have the one now. And it's pretty small. So are my hands, so when I'm holding it, it looks pretty big ... I wish I was doing that now.”

5. On Charlie Sheen: “It's going to be a night of partying and heavy drinking. Or, as Charlie Sheen calls it, breakfast.”

4. On the HFPA: "I'd like to crush this ridiculous rumor that the only reason 'The Tourist' was nominated was so that the Foreign Press could hang out with Johnny Depp and Angelina Jolie. That is not the only reason - they also accepted bribes. All that happened was some of them were taken to see Cher in concert. How the hell is that a bribe? 'Do you want to go and see Cher?' 'No.' 'Why not?' 'Because it's not 1975!'"

Check out a whole new batch of sure-to-be controversial quotes when Ricky hosts the 69th Annual Golden Globe Awards, this Sunday on NBC!