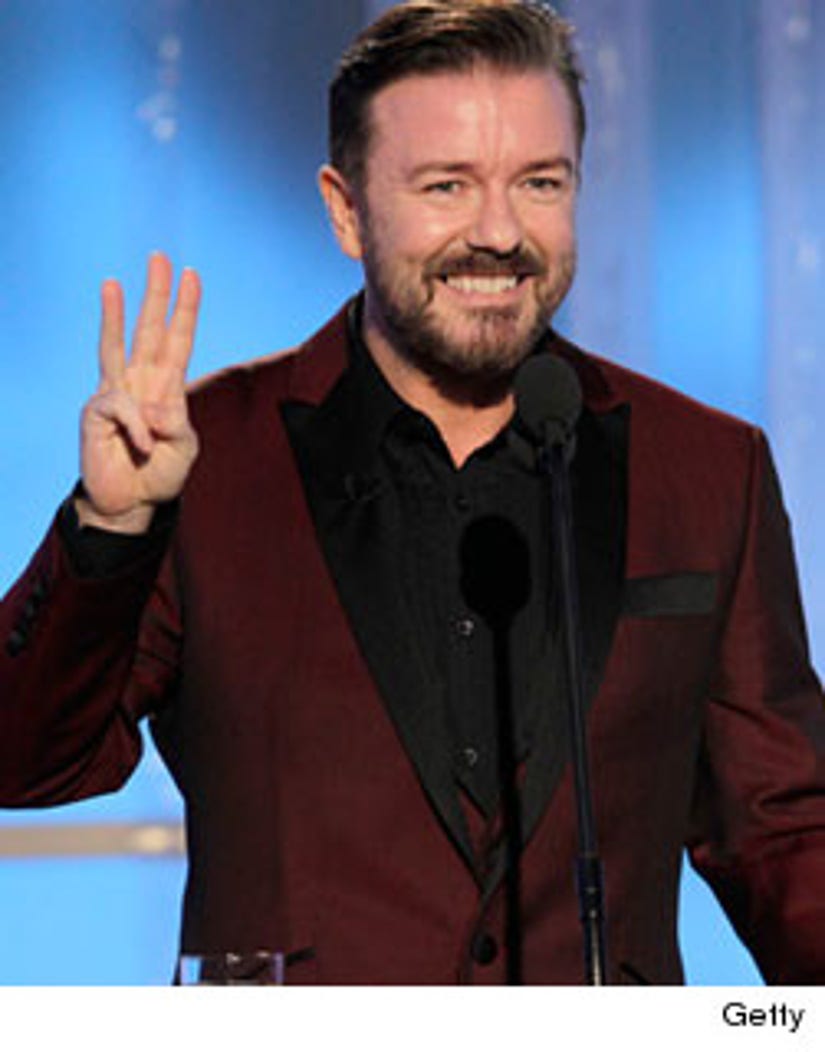 Ricky Gervais hit the stage for the third year in a row as host of the 69thAnnual Golden Globe Awards, and as expected, no celeb (or host network) wassafe!

On Hosting Rules: "No profanity. That's fine, I've got a huge vocabulary;No nudity. See that's a shame cuz I've got a huge … vocabulary, but a tinypenis. It's true, doesn't matter, I don't care, it works, don't worry 'bout it,it's fine; No smut or innuendo, and I'm not to libel anyone; and I mustn'tmention Mel Gibson this year -- not his private life, his politics, hisrecent films, and especially not Jodie Foster's 'Beaver.' I haven't seenit myself, I've spoken to a lot of guys here, they haven't seen it either. Butthat doesn't mean it's not any good."

On Hollywood divorces: "Arnold and Maria, JLo and Marc, Ashton and Demi,Kim Kardashian and some guy no one'll ever remember. He wasn't around long.72 days. A marriage that lasted 72 days. I've sat thru longer James Cameronacceptance speeches than that."

On Justin Bieber's paternityscandal: "Justin Biebernearly had to take a paternity test. What a waste of a test that would havebeen. No, he's not the father. The only way that he could impregnate a girl wasif he borrowed one of Martha Stewart's old turkey basters."

(The HFPA) do an awful lot forcharity and are a non-profit organization ... just like NBC."

On Johnny Depp: "This time last year our first presenter was thebiggest movie star on planet, but I insulted his film 'The Tourist,'causing his career to plummet so far that he was forced to work with me on mynew show 'Life's Too Short' which premieres on HBO on Feb. the 19th.Please welcome the man who will wear literally anything Tim Burton tellshim to ... Johnny Depp."

To Johnny Depp: "Iwant to ask you a question. And be honest. Are you on recreational drugs? I'mjoking, that's not the question. And we all know the answer. Have you seen 'TheTourist' yet?"

Onthe crowd: "You'reso much better than last year's audience. They had a stick up their(expletive)."

On Salma Hayek and Antonio Banderas: "They're ridiculously gorgeousspecimens, they're extremely talented and probably very interesting ... I'm notsure, I couldn't understand a (expletive) word they said."

On Natalie Portman: "Last year she won both the Golden Globe andthe Oscar for brilliant performance in 'Black Swan.' This year she tooktime out to have a baby, and consequently she's been nominated for nothing ...Never put family first."

Not every celebrity took his jokes lying down. Madonna had her own comic moment on stage when she took jabs at the host, which sent him running. Watch the clip below:

What was your favorite Ricky moment? Let us know in the comments below!