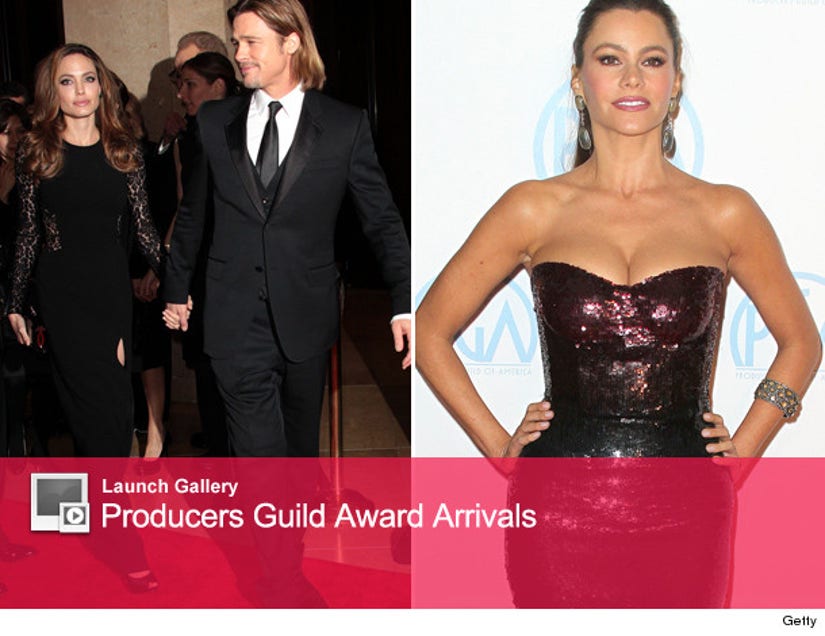 The awards went to the producers of the year's best movies and TV shows at last night's Producers Guild Awards -- but all eyes were on the stars on the red carpet.

Brad Pitt and Angelina Jolie hit up the event at the Beverly Hilton on Saturday night, where after making a splash in a white gown at the Golden Globes, Angie was back in black. Pitt looked more comfortable as well -- as he ditched the cane he has been using since an accident with the kids.

While Brangelina looked great, it was Sofia Vergara who stole the show in a tight and revealing dress that put all the emphasis on her famous curves. Does this chick ever look bad?!

Also on the red carpet: Viola Davis, Jessica Chastain, Alicia Keys and Evan Rachel Wood. Check out all the arrival pics above!

For more about the award winners, see the full wire below:

LOS ANGELES (AP) -- "The Artist" followed its Golden Globe win by taking top honors at the Producers Guild Awards on Saturday, as the silent film continues its unlikely run toward Oscar night.

Producer Thomas Langmann received the award handed out at the Beverly Hilton by the Producers Guild of America, as "The Artist" beat out George Clooney's family drama and another Oscar favorite, "The Descendants."

"The Artist" won best musical or comedy at Sunday's Golden Globes and "The Descendants" won best drama along with a best actor nod for Clooney, making the movies likely rivals for Best Picture at the Academy Awards.

The other nominees in the movie category were "War Horse," "The Help," "Bridesmaids," "Hugo," "The Girl With the Dragon Tattoo," "Midnight in Paris," "Moneyball" and another Clooney movie, "The Ides of March."

Along with honors from other Hollywood professional groups such as actors, directors and writers guilds, the producer prizes have become part of the preseason sorting out contenders for the Oscars, whose nominations come out Jan. 24.

A team of seven producers including Martin Scorcese received the award for "Boardwalk Empire," which also beat out Showtime's "Dexter," CBS's "The Good Wife," and another HBO series, "Game of Thrones."

Other winners at the PGA awards include PBS's "Downton Abbey" for long-form television, "The Adventures of Tintin" for animated film, "Beats, Rhymes & Life" for movie documentary and "The Colbert Report" for talk and live entertainment shows.