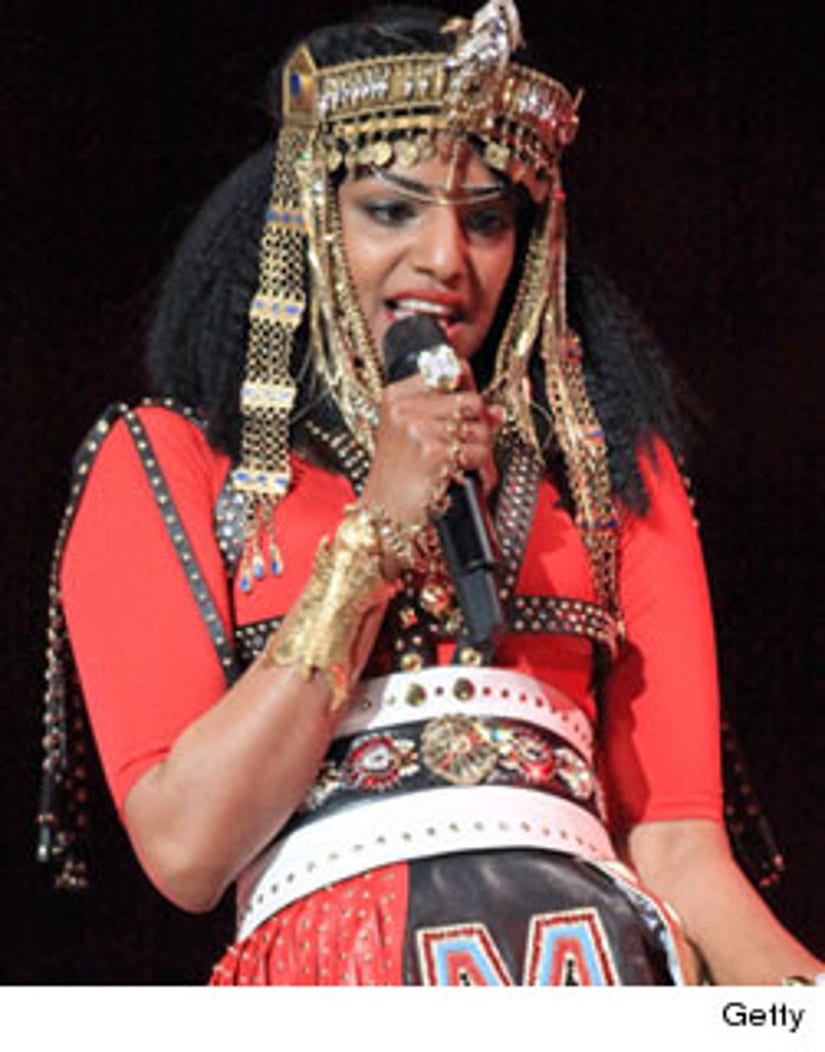 Indianapolis (AP) -- British hip-hop artist M.I.A.'s obscene gesture in the Super Bowl halftime show is prompting apologies from NBC and the NFL. But it isn't immediately registering as a moment that viewers latched on to.

The digital video recorder maker Tivo said Monday that there wasn't an appreciable bump in viewers who played back the moment where M.I.A. extended her middle finger during Madonna's performance of "Give Me All Your Luvin'" on Sunday night's show.

Tara Maitra of Tivo said the company would check to see if more people play back the moment on Monday after there was publicity about it. Tivo has 2 million customers in the U.S.

The NFL blamed NBC for being not quick enough to censor the gesture, while NBC noted that the NFL is responsible for the content of the halftime show.

There was no wardrobe malfunction, nothing like that glimpse of Janet Jackson's nipple eight years ago that caused an uproar and government scrutiny. Instead, in front of some 110 million viewers on NBC and uncounted others online, she flipped the bird and appeared to sing, "I don't give a (expletive)" at one point, though it was hard to hear her clearly.

"The obscene gesture in the performance was completely inappropriate, very disappointing and we apologize to our fans," said Brian McCarthy, spokesman for the NFL, which produced Madonna's halftime show. He said that M.I.A. had not done anything similar during rehearsals and the league had no reason to believe she would pull something like that during the actual show.

The risque moment came during the biggest TV event of the year. The screen briefly went blurred after M.I.A.'s gesture in what was a late attempt — by less than a second — to cut out the camera shot.

"The NFL hired the talent and produced the halftime show," NBC spokesman Christopher McCloskey said. "Our system was late to obscure the inappropriate gesture and we apologize to our viewers."

Back in M.I.A.'s native Britain, the London Times noted Monday that while all eyes may have been on Madonna at halftime, "it was the extended middle finger of the British hip-hop star M.I.A. that caused the most controversy." The Guardian wondered whether anyone would really be outraged.

"You'd be forgiven for not having a coronary over the fact M.I.A. gave Super Bowl viewers the finger during her halftime guest spot with Madonna," the newspaper wrote in its music blog. "For most fans, it was probably more shocking to see M.I.A. performing a rehearsed dance routine than flipping the bird."

Jackson's infamous oops during the 2004 halftime show raised a storm of controversy and put CBS in hot water with the Federal Communications Commission amid questions about the responsibility of TV networks to police their airwaves.

Justin Timberlake ripped off Jackson's bustier, exposing her breast for nine-sixteenths of a second, a moment for which CBS was fined $550,000 by the FCC. The network challenged the fine and last fall, a federal appeals court ruled against the FCC despite an order from the U.S. Supreme Court to review the case. The three-judge panel reviewed three decades of FCC rulings and concluded the agency was changing its policy, without warning, by fining CBS for fleeting nudity.

This year's game, in which the New York Giants beat the New England Patriots 21-17, is expected to challenge last year's record of being the most-watched U.S. TV event ever.

M.I.A. is best known for her 2007 hit "Paper Planes," a Grammy nominee for record of the year that memorably features a sample of the Clash song, "Straight to Hell." It was featured on the soundtrack to the movie "Slumdog Millionaire."

Madonna had admittedly been nervous about her performance, hoping to position herself as the queen of a new generation of pop stars with an opulent show and a sharp performance that mixed her new release with more familiar songs. She seemed like Roman royalty when muscle-bound men carried her extravagant throne across the football field to the stage for her opening song, "Vogue."

Guests Cee Lo, Nicki Minaj and dance rockers LMFAO also appeared with Madonna. The singing and dancing on "Vogue" was smartly choreographed, as Madonna moved more deliberately — she is 53 — but still adroitly. She briefly appeared to stumble at one point while trying to make a step on the stage set, but recovered in time.

She let a tightrope walker make the more acrobatic moves during a performance of "Music."

Madonna carried gold pompons for a performance of her frothy new single. Twitter was alight with questions about the vocals being lip synched or augmented by tapes, particularly during this song.

The best guest was clearly Cee Lo, who joined Madonna for the final song, "Like a Prayer." They were joined by a robed chorus in the show's most soaring performance. With a puff of white smoke, Madonna disappeared down a trapdoor in the stage, and lights on the field spelled out "World Peace."

The performance was also carried live on SiriusXM Radio, giving Madonna the biggest single audience of her career. For all the elaborate choreography and flashy effects, the finger incident is the more likely headline from the event.

Earlier, Kelly Clarkson, Blake Shelton and Miranda Lambert offered some pregame patriotism. Shelton and Lambert did a twangy duet on "America the Beautiful" and Clarkson, in a simple black dress, sang "The Star Spangled Banner" without a hitch after last year's performer, Christina Aguilera, flubbed a line.