The Grammy Awards were held in Los Angeles on Sunday night, and whether you're a casual viewer or pop culture junkie, there are probably a few unanswered questions you have about the show.

We here at toofab have the answers to those burning questions, including where music power couple Beyonce and Jay-Z were, who exactly Bon Iver is ... and what was up with that girl wearing a machine gun on her arm?! Find out, below! 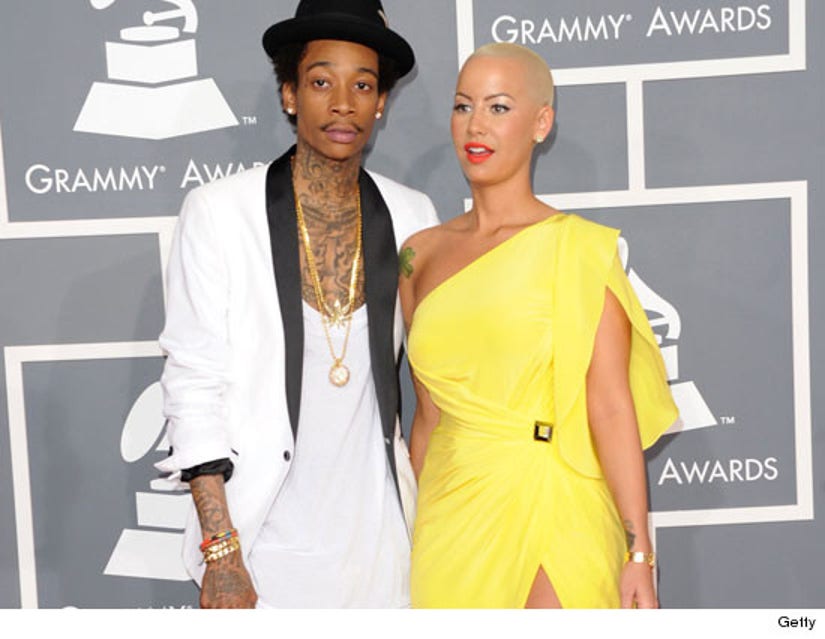 They've been dating for a year and are seen together often, but are rapper Wiz Khalifa and model Amber Rose really tying the knot? Not quite yet, says the couple.

When asked by E! on the red carpet, Amber replied "We want to get married. We're just taking our time. Whenever he wants to propose, that's when it will happen." Well, Valentine's Day is tomorrow ... looks like the ball in in your court, Wiz.

4. Where were John Stamos, Beyonce and Jay-Z, and Kanye? 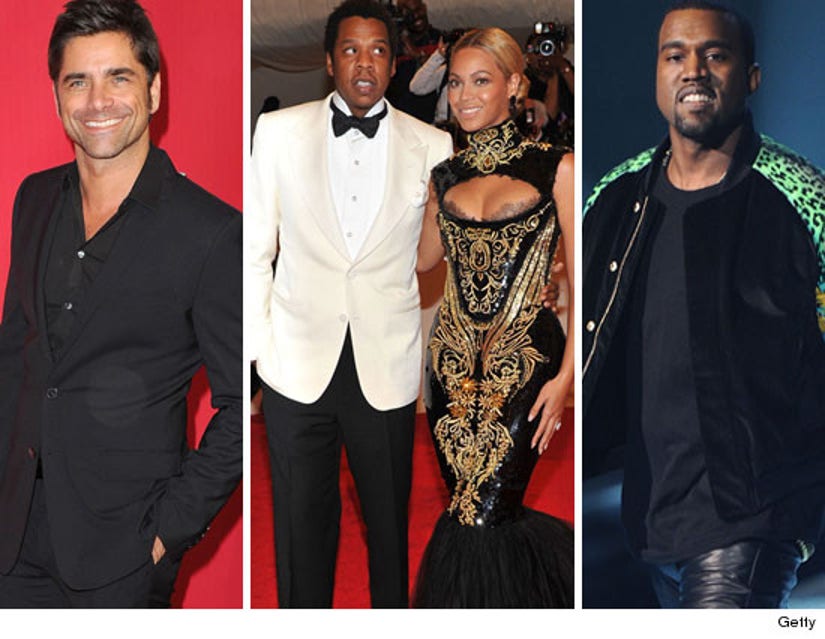 Honorary band member John Stamos' absence from the much-anticipated first live performance by The Beach Boys in over two decades didn't go unnoticed! Though the man himself shot down the idea last week by responding to a fan who asked on Twitter, saying "no way- just watching on tv like the super fan i am," that didn't stop many from tweeting during the show, asking where he was. Fear not, fans, the hunky 48-year-old will reunite with the group for their 50th Anniversary tour this summer.

According to US Weekly, Beyonce and Jay-Z opted for a pizza date night in New York instead of making the cross-country trip for the awards ceremony. The new parents left baby Blue Ivy at home and grabbed some grub at Lucali in Brooklyn. Regardless, Jay still took home a Grammy for Best Rap Performance for his song "Otis" with Kanye. Speaking of whom...

It came as a shock that the most-nominated artist of the night, Kanye West, decided to skip the Grammys entirely. Up for seven awards (winning four), we're surprised there was no performance, no red carpet appearance, no parties ... not even a tweet. Pretty strange for a man who loves the limelight. 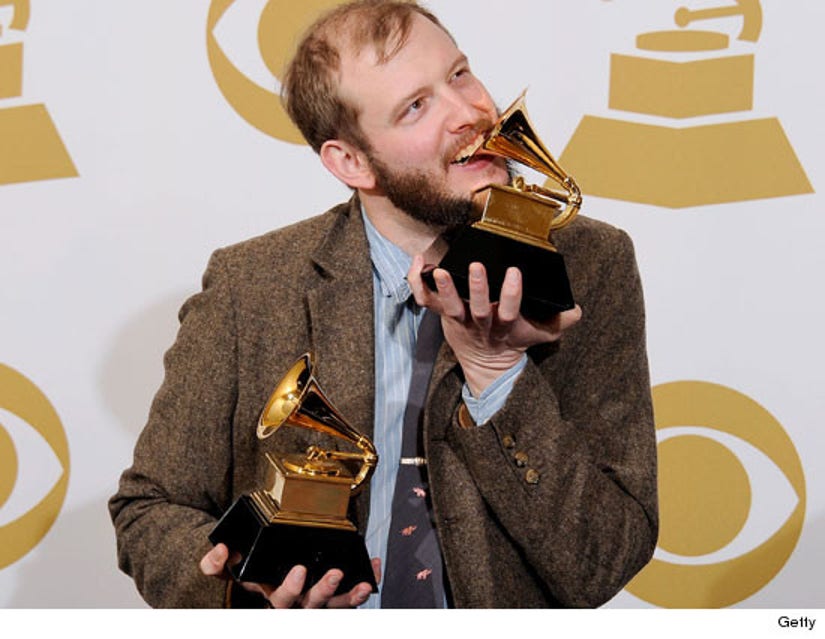 When Bon Iver was announced as the Best New Artist winner, did you ask yourself -- who? If so, don't worry, you aren't the only one.

The folk band -- whose name is pronounced “bonne hiver” which means “good winter" in French -- was formed in 2007, but has really gained attention in the last year with their self-titled album, which also won the Best Alternative Music Album Grammy last night.

Lead singer Justin Vernon had isolated himself in the woods of Wisconsin to get over a break-up, and musical history was made. Between him and Adele, it goes to show that break-ups are the way to great music!

2. Did Adele set a Grammy record? 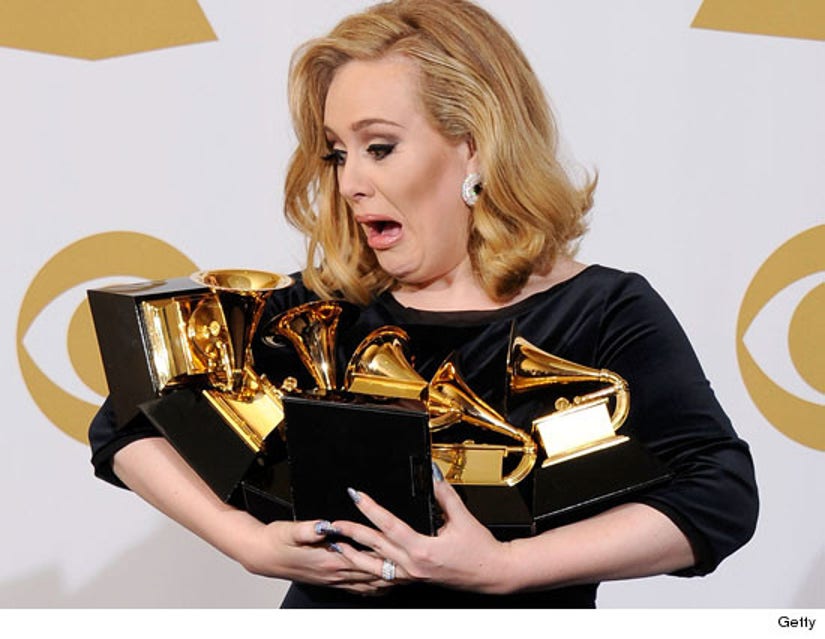 Adele had one incredible night! The 23-year-old Brit made her triumphant return to performing after undergoing throat surgery last year, and she went 6-for-6 with Grammy wins ... but was it a record-breaking evening?

Not quite, but tying with Beyonce as the females who've won the most Grammy Awards in one night isn't bad, right? Adele's 6 wins for her album "21" tied with Bey's 6 wins in 2010 for her "I Am ... Sasha Fierce" record. Not bad company. 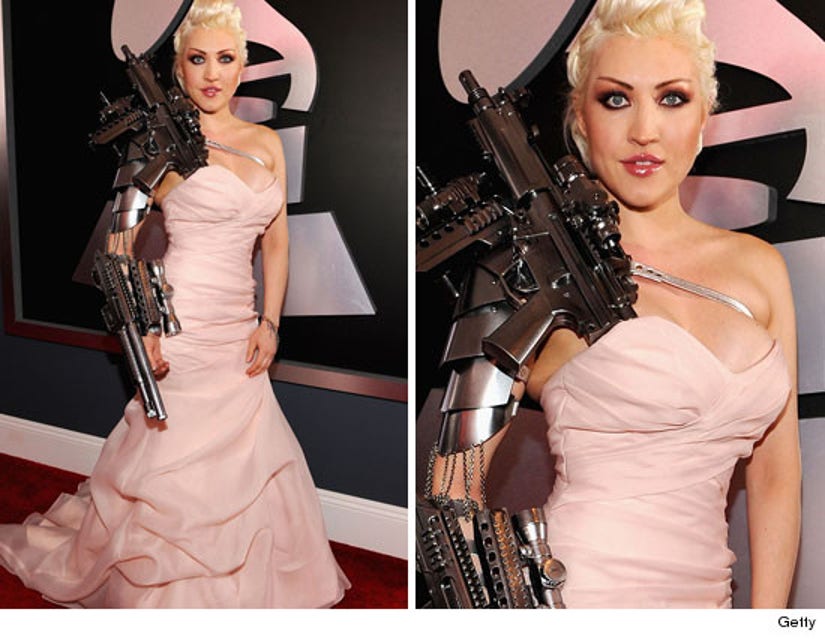 You may not know the name Sasha Gradiva, but if you saw any Grammy red carpet photos you'll certainly recognize her!

The Russian native is an international pop star who hit the carpet in a pretty pink gown ... and fake guns strapped to her right arm. The 28-year-old says she wanted to convey that "violence is never the answer" and that "art should always be more powerful than weapons in creating change."

While we can appreciate the sentiment, the garish garb was out of place on the carpet and her refusal to remove the guns got her kicked off the Grammy premises.