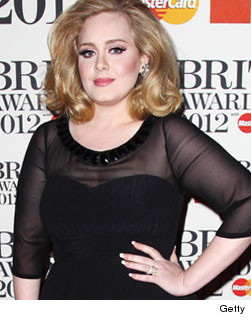 It has been a dramatic year for the down-to-earth north London diva Adele, who based her chart-topping songs of heartbreak on a rocky relationship.

Her sophomore album "21'' won six Grammys last week and has sold more than 6 million copies in the United States alone. But Adele also had to undergo vocal cord surgery in November to fix a potentially career-threatening throat condition.

She delivered a powerhouse performance of her single "Rolling in the Deep'' to thousands of fans and industry insiders at London's O2 arena.

"It's been an amazing year,'' Adele said as she received the female artist statuette from petite pop star Kylie Minogue.

"I feel like a drag queen next to you,'' joked the winner, who wore a sleek black Burberry gown but towered over Minogue. She thanked her record company "for letting me be the kind of artist I want to be.''

The 23-year-old lost out on the British single prize to boy band One Direction's "What Makes You Beautiful,'' but took the coveted album of the year award for "21.'' The statue was presented by singer George Michael, returning to the stage after suffering life-threatening pneumonia in December.

The red-headed 21-year-old has been panned as bland by some critics, but has amassed legions of young fans through online releases and a relentless calendar of shows.

Sheeran thanked his manager for transforming a "spotty, chubby ginger teenager'' into a Brit-winner.

Long derided as dull, the Brits have become a lively celebration of U.K. music and style -- and this year's awards come with British music riding high around the world.

"I'm so, so proud to be British and to be flying our flag,'' said Adele, who has the century's best-selling album so far.

Tuesday's event -- which kicked off with Coldplay performing "Charlie Brown'' and included live turns from Sheeran, Florence and the Machine, Noel Gallagher, Bruno Mars and Rihanna -- brought out a host of stars who blended rock 'n' roll attitude and fashion finery.

Blur frontman Damon Albarn dressed down for the red carpet in jeans and a flat cap, and former Oasis guitarist Noel Gallagher wore a leather jacket. But others struck a snazzier note. Actor Ray Winstone arrived in a pinstriped three-piece suit, complete with watch chain.

The Barbadian singer, who has often been in the news for non-musical reasons since her then-boyfriend Chris Brown attacked her at a pre-Grammy Awards party in 2009, thanked her fans.

"At times when I feel misunderstood, my fans always remind me that it's OK to be myself,'' she said.

"This award means much more to me than you know,'' said the singer, who has gone from Internet-fueled buzz to backlash in record time after a disastrous performance last month on "Saturday Night Live.''

Britpop icons Blur were received a special prize for their contribution to music.

The four original members -- Albarn, Graham Coxon, Alex James and Dave Rowntree -- performed together for the first time since a series of concerts in 2009, offering versions of 1990s hits including ``Girls & Boys'' and ``Parklife.''

Most of the awards are chosen by more than 1,000 musicians, critics and record industry figures, with several decided by public vote.

The Willis-Moore Family Is Social Distancing Together

All the Celebs Changing Up Their Hair During Quarantine

Modern Family Cast from the Beginning to the End