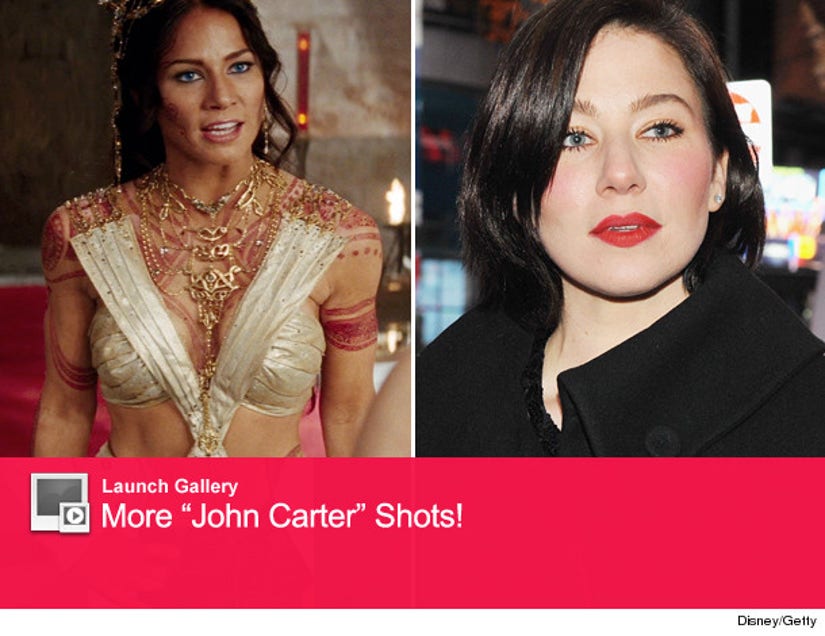 Actress Lynn Collins completely transformed her appearance for her role as a Mars princess in "John Carter" -- but the biggest change for the actress was her very revealing wardrobe.

In addition to a daily five hour makeup job -- where Lynn was spray-tanned, given bright blue eyes and covered in intricate red body tattoos -- Collins was also given a collection of barely-there outfits to play the beautiful-but-deadly Dejah Thoris.

Collins sat down with toofab to talk about her reservations about the costumes ... and how she got in shape to pull them off!

toofab: How did you initially feel about the wardrobe?

Lynn: I had a talk with both Mayes [Costume Designer Mayes Rubeo] and Andrew [Director Andrew Stanton] and was like, "I don't want this to be a skin show, because then nobody is going to pay attention to what I have to say."

In the end, what I like about the skin that is shown, is that it shows her vulnerability. Being naked is vulnerable, showing your ass is vulnerable.

She would never be that exposed [either]. For her it's like "ughhh" and for me at the beginning that's how it was too ... until it was like, whatever, everybody's seen boobs!

toofab: How did you get in shape for the role? Did you diet?

Lynn: I can't really diet because I have hypoglycemia and I have to eat like every 3 hours ... which is actually good for dieting.

I just had to build muscle, that was my thing. I had just played a heroin addict, I had to come in and build all of this to be able to be harnessed [for the film's rigorous wire work]. And you know, the only way you can really get rid of cellulite is by sweating, so I had to work it out.

When you work out it's cyclical. You work out to help your body and it releases the stress of worrying about your body, so it's this double affect. As long as I stayed in my routine, I was good.

toofab: You had to have cheat days ...

Lynn: There were things in London called the Queen's Chocolates, which are dark chocolate filled with cream of rose and cream of violet. So good!

One day I was like, [motions eating them all] and two days later, I go to the trainer and the trainer is like, "What's with your shoulders? Your shoulders look big today." I was like, "I don't know!" -- now he'll read this and be like, "That's what she did!"

toofab: Your character is a pro at swordplay. What was the training like?

Lynn: I went to Juilliard, so I took a lot of fencing and sword training there. And then when we did the training, the same amount of time I was training for physique, I was also training with swords. So it was like 2 hours physique, 3 hours swords."

Check out a 10 minute sneak peek of the flick below: