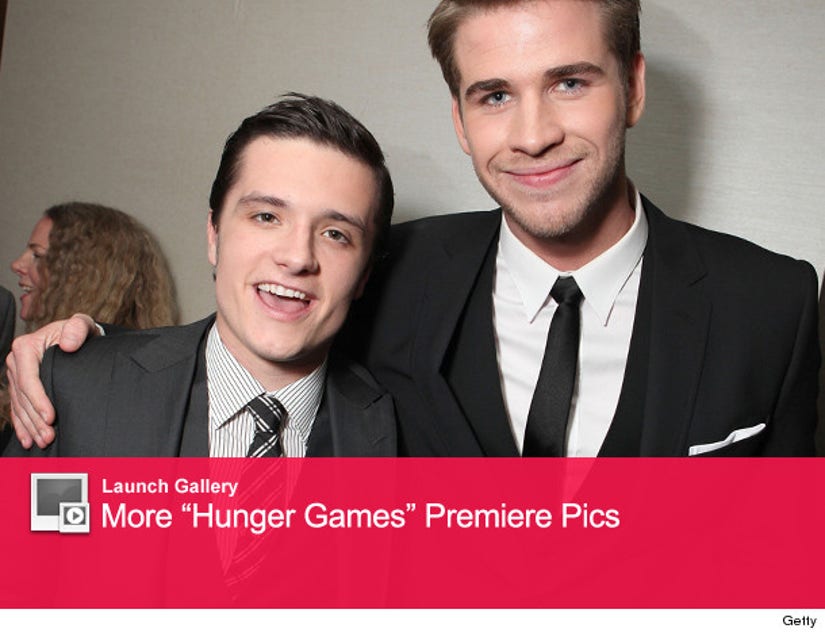 When "The Hunger Games" opens March 23, it will likely do for Josh Hutcherson and Liam Hemsworth what "Twilight" did for Robert Pattinson and Taylor Lautner ... make them instant teen heartthrobs.

For now though, Josh and Liam are just two down to Earth guys with one BIG movie on the horizon.

toofab and a small group of journalists recently sat down with the duo to talk about the hoopla surrounding the highly-anticipated flick, the insane physical training they went through for their roles and Josh's cooking specialty: "Cake Balls."

Are you guys ready for the fan reaction? The heartthrob status that comes with the movie?
Liam: We're taking it day by day and seeing what happens. It's very exciting to be a part of it and to see how crazy it gets.

Are you stopped in street regularly?
Liam: No stalkings yet. We'll see.

When did you first find out about the books?
Josh: Right around when I heard they were making movies out of them.

Liam: Originally I heard about them about a year before it went into production. And then a year went by and I heard they were going into production, so I read these books and became a fan, met with [Director] Gary Ross and then came back a week later to read with Jennifer [Lawrence].

Josh: It was the exact same [with me], we saw each other at meetings.

Did you both have to screen test with Jennifer -- and did you know you'd make a great team?
Josh: With me, I think I hit it off with Jennifer. I met her a couple times at events and we talked ... we're both from Kentucky and had that automatic connection. I felt really good. She's such an easy person to get along with and acting with her is incredibly easy as well. For me, I kind of felt right away that we really hit it off.

Did you go in for the roles you play?
Liam: Yeah, for me it was always for Gale.

Josh: Peeta is the character I connected with by far the most in the book and felt like I wanted to play and could play.

What team are you on? Team Gale or Team Peeta?
Liam: We've jumped onto Team Haymitch. We're gonna lead that team.

Peeta is reserved, but then he turns it on for the cameras. What's side is more fun to play?
Josh: I like playing both, it's fun. For me, I think I'm very much like that. I can be a lot more quiet and reserved with my friends and more subdued and then when I need to, I can turn it on and be big and entertaining. As far as what was more fun to play, I kind of like the more quiet version. As an actor, it's more interesting because you have to do more saying less, which is always a challenge.

Would you ever make a bold proclamation of love like Peeta does [See video above]:
Josh: I could see myself doing that accidentally and getting in trouble afterward.

Who did you bond with from the rest of the cast?
Josh: Woody [Harrelson]. I had a ton of scenes with him. Just watching him, he's epic. I've grown up loving all his work and to be in scenes with him and watch him, it was definitely, very big for me.

Liam: All my stuff's with Jennifer, so... [Laughs] Jennifer's an amazing actress and so much fun to work with. She's always keeping you on your toes and you never really know what she's gonna do.

What kind of training did you have to do to prepare?
Liam: I had no fight training or anything like that for this one, I lost a lot of weight for it. My character is living in depression in District 12, hunting for his food everyday and for his family so he's not eating a lot. I wanted to feel what it's like to feel hungry and definitely wanted to be slimmer than I usually am for it.

And it was the complete opposite for you Josh, right?
Josh: I dyed my hair blonde, he dyed it brown. He lost weight, I gained weight. We should have switched characters! [Laughs] I had to put on a lot of weight, so I was in the process of eating a ton of chicken and eggs and protein and all that fun stuff and then working out a bunch.

I had this epic trainer named Logan Hood who's like this ex-Navy SEAL guy who kicks ass. It was like flipping tires in the parking lot, slamming baseball bats against body bags and just crazy things. You're using muscles you never even knew you had and you're like "How am I possibly this sore?" I found with Logan I was sore for four days afterwards ... and I was working out five days a week, so I was always sore. I was in a constant state of soreness.

Liam: I worked an hour with him and literally I had to lay down for 20 minutes afterwards because I couldn't drive away. It'd be dangerous to drive away ... I'd pass out.

Were your friends and family after you for set secrets?
Josh: A little bit. I had some people who wanted to visit set and they got to but they were all kept under top secret conditions. It's kind of funny, obviously you don't want to spoil anything for the fans, you want to keep it exciting for them. I get it, but it is a bit much.

Liam: Yeah, its grown more and more as its gone on. As we started shooting it was minimal and now it's humungous.

Is there a sense of relief that it's done ... or the opposite, are your nerves growing?
Josh: I think for me, excitement is building. This whole time we put a lot of work into it, everybody has, and this movie's been pretty anticipated for a while -- so for it to finally be coming out is a relief. I'm so proud of the film, so I'm not really nervous about it because I loved it thoroughly. If I like a movie that I'm in, then other people are going to like it as well ... I'm very hard on myself.

Liam: It was nerve-wracking seeing it for the first time ... because there is so much expectation I was really hoping that it was good. I knew it was going to be and I was really proud, it was literally one of the most powerful films that I've seen.

Liam, are you excited about having a bigger role in the sequels?
Liam: Yeah, if we get to shoot the other ones I'll be very happy. My character does grow a lot more.

What are you looking forward to filming with Katniss [Jennifer Lawrence] in the sequels?
Josh: For me I'm just interested to see where I can take Peeta over the course of the story where he gets brainwashed and loses his mind, I think that's in the third book. Where he starts to hate Katniss. I think that's an interesting dynamic to play, to take Peeta who's been lovey-dovey with Katniss this whole time and kind of flip it around.

Liam: I'd be very excited to shoot the third book, there's a big uprising in that one and rebellions and a lot of fun stuff.

In the movie, the Tributes use hidden talents to survive. Do you have any hidden talents?
Josh: I am not that talented! I play a lot of basketball, I play like 5 days a week in a couple leagues. Champions of leagues.

Liam: Now I say something cool like I make Italian shoes in Italy. I was a shoe cobbler once upon a time. [Laughs] I can surf, I grew up surfing. I used to surf competitively for a couple years.

And Josh, you bake like your character?
Josh: Yeah some, I haven't in a while. But I can bake.
Liam: I came to his room and he's literally baking and I'm like ...
Josh: "What is happening? Stop you're Josh ... this isn't Peeta!"
Liam: "This is weird man."
Josh: I make these things called "Cake Balls" that are incredible. You bake a cake and then you put it in a bowl and mush it up, mix it with icing and put it on a stick in balls and put on candy coating.
Liam: And I was hunting for my food the entire time.
Josh: He went method on us. Where's Liam?
Liam: Oh, he's hunting for his dinner.

Would you survive in the woods?
Josh: 100%. I watch a lot of "Man vs. Wild," Bear Grylls. So that prepared me for this situation. And I grew up in Kentucky, always playing outside and I love hiking and camping. I'd do alright in the woods.
Liam: I think I'd do O.K. for an amount of time.
Josh: You grew up wrestling sharks ...
Liam: I grew up wrestling sharks and fighting crocodiles. It's kind of second nature.

Keep checking back this week for interviews with Jennifer Lawrence, Lenny Kravitz, Elizabeth Banks, Donald Sutherland and the other Tributes.