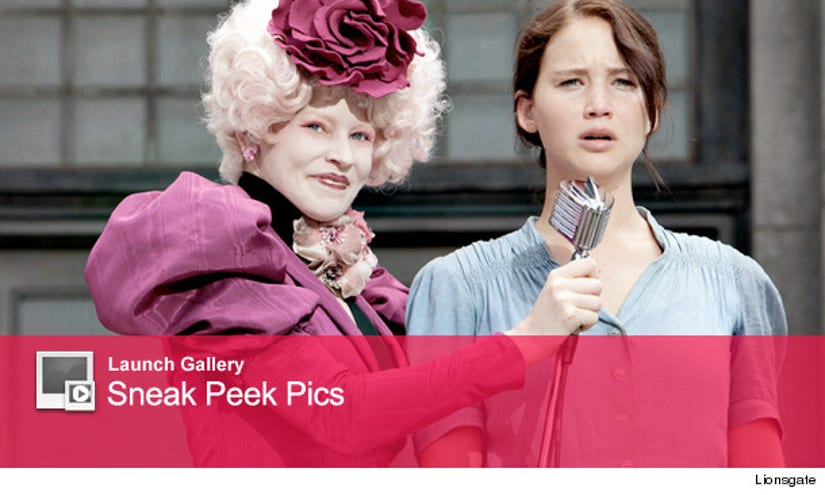 In the dystopian future of "The Hunger Games," 24 teenage "Tributes" from 12 Districts battle it out in a televised death match -- and while the future may look bad, the movie is anything but.

Much brouhaha was made when blonde, 21-year-old Jennifer Lawrence was cast as the brunette, olive-skinned, 16-year-old heroine Katniss Everdeen from Suzanne Collins' books -- but rest assured, Jennifer was the perfect choice.

Lawrence conveys so much emotion and intensity with her eyes as the fiery Katniss, it's clear she approached the role with the same dedication she had for her Oscar-nominated turn in "Winter's Bone."

As for the movie itself, it follows the book almost religiously -- hitting all the big moments fans want to see: Katniss hunting with Gale (Liam Hemsworth), the emotional Reaping ceremony, training, interviews with Caesar, the cave scene with Peeta (Josh Hutcherson) and the muttation-filled conclusion.

Once Katniss and the Tributes enter The Arena, the bloodshed begins ... but only in brutal-but-quick flashes. This is a only a PG-13 movie, people.

It's here where the movie hits it's emotional high point, thanks to the shocking death of a pivotal character. We won't spoil it here, but fans of the books will know what we're talking about. The scene definitely does Collins' writing justice and sets Katniss' rebellion against The Capital in motion.

Another great scene, one of the few not from the books, shows bad guys President Snow (Donald Sutherland) and Seneca Crane (Wes Bentley) explaining the true motivation behind the games. It's effectively chilling and leaves us wanting more from Snow in future installments.

Living up to a fiercely beloved series is a tough task, and "Hunger" does suffer a few (very minor) setbacks.

Collins' tale is told from Katniss' point-of-view, meaning much of her inner-dialogue is lost in translation to the screen. While fans will know what she's thinking, newcomers to the series may not fully grasp Katniss' real motives behind her blossoming romance with Peeta.

Katniss' two "Girl on Fire" dresses, made with the helpful hand of CG, also don't quite live up to the wonder and amazement they have in the books.

In short: With a strong female lead we can really root for, great acting all around and some tangible suspense, director Gary Ross made sure "The Hunger Games" is no "Twilight" ... and that's a very good thing!

"The Hunger Games" opens March 23, and for more coverage including reviews, photos and more, be sure to check out toofab's Movies You Love page here!