LOS ANGELES (AP) — Adam Sandler and friends have scored a new high — or low — among voters of the Razzies, an Academy Awards spoof that presents prizes for the year's worst movies.

Sandler's “Jack and Jill” managed a Razzies first on Sunday, claiming 10 awards to sweep every single category. Along with the movie's worst-picture award, Sandler won for both worst actor and actress for his dual roles in “Jack and Jill,” in which he plays a family man and his own pesky twin sister. 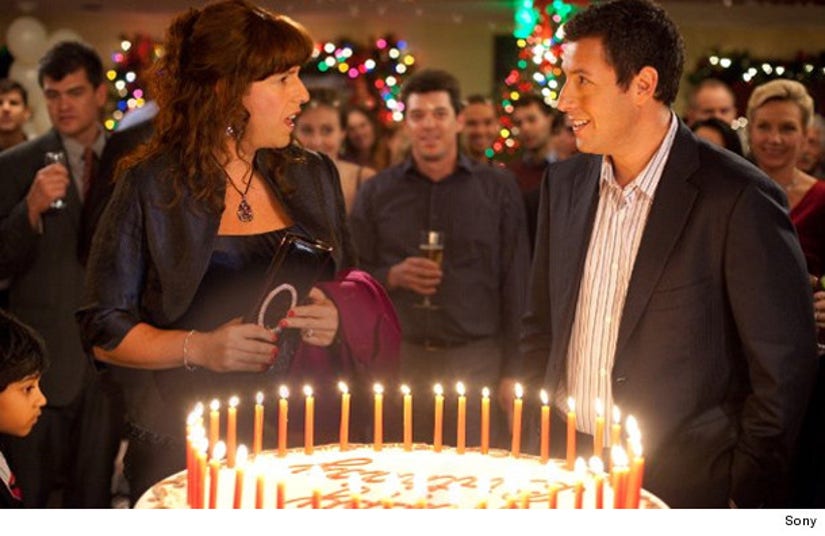 “He didn't play triplets, but he couldn't have won more awards if he had,” said Razzies founder John Wilson.

Sandler also shared the “Jack and Jill” Razzies for worst ensemble, worst screen couple opposite either himself or co-stars Al Pacino or Katie Holmes and worst screenplay as a co-writer on the movie.

It's the only movie in the 32-year history of the Razzies to win every prize.

But the Razzies did not overlook Sandler's other starring role from last year. Sandler's worst-actor prize came for both “Jack and Jill” and his earlier comedy “Just Go With It.” Dennis Dugan, the filmmaker behind both comedies, was named worst director for both flicks.

“Jack and Jill” also was picked as worst remake, rip-off or sequel, billed by Razzies voters as a remake or rip-off of Ed Wood's cross-dressing cult favorite “Glen or Glenda?”

Despite the usual bad reviews Sandler receives, “Just Go With It” was a $100 million hit like most of his comedies. But even Sandler fans had second thoughts about “Jack and Jill,” which took in only $74 million, one of the worst results among his mainstream comedies.

“Adam Sandler has a pretty much basic attitude of, 'No matter how dumb I make it, my fans are going to pay to see it,”' Wilson said. “I guess it's more about the complete lack of any genuine effort or concern or pride. An attitude of this is good enough, but when you consider what they're charging for movie tickets today, it wasn't good enough.

“It was good enough to get our attention. If you work with the attitude that you're just going to be good enough, then you're probably good enough for the Razzies.”

The awards were announced at a gag ceremony Sunday night at a magic shop in Santa Monica, Calif. Razzie winners usually are announced the night before the Oscars, but organizers this time decided to move out of Hollywood's busy awards season and do their show on April Fool's Day.

But it could be a one-time experiment. Wilson said he got feedback from voters of the Golden Raspberry Award Foundation, which anyone can join for a membership fee, that they prefer handing out their prizes around Oscar time.

“I think our members prefer the faux glamor of having it be Oscar eve,” Wilson said.