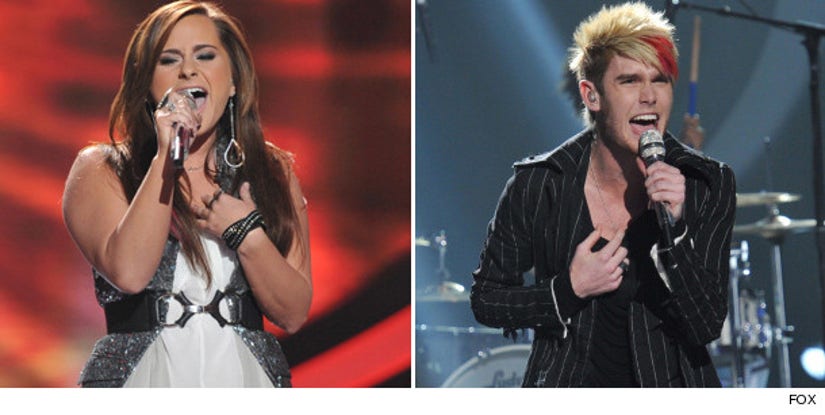 LOS ANGELES (AP) -- Elise Testone got it on with the "American Idol" judges -- and not in a good way.

The rockin' 28-year-old teacher from Charleston, S.C., clashed with the panel after performing Alicia Keys' "No One" and Marvin Gaye's "Let's Get it On" during an evening of old and new tunes on the Fox talent competition. Randy Jackson challenged Testone's song choices, while Jennifer Lopez called her out for not showing enough emotion on stage.

"For me, I'd like to see even more of that," charged Lopez.

Testone, who once wowed the panel with a rendition of Led Zeppelin's "Whole Lotta Love" but has ended up in the show's group of low vote-getters four times, seemed dismissive of the judges' comments. She later relented and acknowledged: "I'm always trying to find that balance. I know I got it. I'm just trying to show it to you in a minute and a half."

The judges didn't have any beef with Joshua Ledet. They gave the booming 20-year-old gospel singer from Westlake, La., standing ovations after both Fantasia's "I Believe" and Sam Cooke's "A Change is Gonna Come." Following his first performance, Jackson told Ledet that he was "one of the most gifted singers I think we've ever met on this show."

"Your voice just climbs inside of everybody and changes them for that moment," Steven Tyler beamed after the Cooke classic.

Skylar Laine, the 18-year-old country rocker from Brandon, Miss., and Phillip Phillips, the growling 21-year-old singer from Leesburg, Ga., were both praised for connecting with the crowd. Laine put a country spin on Lady Gaga's "Born This Way" and Marvin Gaye's "Heard It Through the Grapevine," while Phillips made Usher's "U Got It Bad" and Wilson Pickett's "In The Midnight Hour" his own.

"I feel like every time you come on stage, it's a party," Jackson told Laine.

After weeks of being criticized for lukewarm performances, soaring 18-year-old crooner Hollie Cavanagh of McKinney, Texas, redeemed herself in the judges' eyes with feverish takes on Adele's "Rolling in the Deep" and Dusty Springfield's "Son of a Preacher Man," but Colton Dixon, the 20-year-old rocker from Murfreesboro, Tenn., failed to completely deliver with his renditions of Lady Gaga's "Bad Romance" and Earth Wind and Fire's "September."

"You sound good, but it's not as exciting as we would've liked," Jackson said after "September."

Jessica Sanchez, the sassy 16-year-old vocalist from San Diego who was saved by the judges last week after receiving the fewest viewer votes, attempted to raise her status with "Idol" fans this week with passionate performances of Alicia Keys' "Fallin'" and Otis Redding's "Try a Little Tenderness."

"I hope America shows up and supports you this week," Jackson declared.

"Idol" host Ryan Seacrest said one of the seven finalists will be dismissed Thursday.