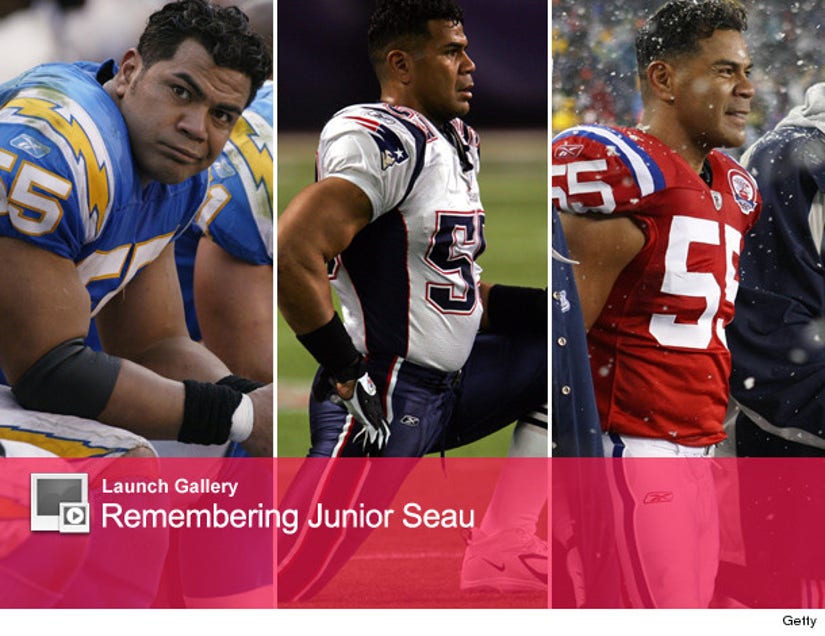 As news of Junior Seau's death​ spread across the internet, NFL and Hollywood stars took to Twitter to pay their respects.

San Diego Chargers @chargers
Everyone at the Chargers is in complete shock and disbelief right now. We ask everyone to stop what they're doing and send their prayers to Junior and his family.

New England Patriots (@patriots)
We were shocked to hear of the initial reports regarding Junior Seau earlier today and are deeply saddened by the news of his death. We were fortunate to have had Junior join the Patriots in 2006 and are thankful for his many contributions to the team over the next four years. He had a legendary NFL career and his unrivaled passion for the game quickly made him a fan favorite here in New England. This is a sad day for the entire Patriots organization, our coaches and his many Patriots teammates. Our heartfelt thoughts and prayers go out to his family and his many friends who will mourn this loss.

Donte Stallworth (New England Patriots) @DonteStallworth
My prayers & condolences to the family of Junior Seau...great player & even better man. Glad to have had the honor to suit up with you bro!!

Reggie Bush @reggie_bush
R.I.P Jr. Seau one of the greatest players to play the game!

Chad Ochocinco @ochocinco
My prayers and condolences to the family of one of the NFL's greatest linebackers to ever play the game.. Junior Seau.. R.I.P

Kurt Warner @Kurt13Warner
Saddened 2 hear of the death of NFL GREAT Junior Seau! A great football player but an even GREATER man! He will b missed!

USC Trojans @USC_Athletics
The Trojan Family lost a legend today. Junior Seau, we will miss you. Our condolences to his family. #RIP55

Holly Robinson Peete​ @hollyrpeete
Paralyzed with grief over the loss of our dear friend Junior Seau...Husband devastated. I just don't want to believe it Loved him....

Nick Lachey @NickSLachey
So sad to hear about junior seau's passing. I loved him as a Trojan and got to know him a little over the years. Great guy. #rip

Tito Ortiz @titoortiz
My thoughts and prayers goes out to Junior Seau and family. I met and knew him. He was a great guy. Sad day

Desmond Howard @DesmondHoward
I will always remember Junior Seau as an uplifting and positive force in the NFL. Praying for his family at this time.

Matt Schaub (Houston Texans) @MSchaub8
Saddened to hear about Junior Seau. One of the greatest to play the game. Great human being. Honored to have shared the field with him. #RIP

Frankie Delgado @frankiedelgado
​RIP Junior Seau u inspired me to play sports with ur great energy and dedication, its a sad day, u will be missed, #55

Pierre Thomas (New Orleans Saints) @Pierre_Thomas
We must enjoy each day like its our last...RIP Junior Seau

Sean Weatherspoon (Atlanta Falcons) @SeanWSpoon56
RIP Junior Seau, one of the best to ever do it!

Laurent Robinson (Jacksonville Jaguars) @LaurentRobinson
Just heard the news on Junior Seau. Had a chance to meet him and here him speak last year during training camp with the Chargers. #RIP

Darius Butler (Carolina Panthers) @DariusButler27
RIP Junior Seau. So sad hearing that news. Glad I got a chance to meet and work with him. #BuddyBuddy

Rich Gannon @RichGannon12
My thoughts and prayers go out to the Seau family. Junior was a special player and person. A true legend. He will be missed.

Greg McElroy (New York Jets) @GVMcElroy
Just found out about Junior Seau. Terrible news. RIP to one of the greatest linebackers ever.

Kirk Morrison @kirkmorrison
I keep hearing conflicting reports. Waiting to hear back confirmation on the status of Junior Seau. This is unbelievable right now.

Mohamed Massaquoi @momass11
RIP Junior Seau. Life is so precious. Cherish every moment of it.

Spencer Paysinger ‏ @SpittyP
Jr. Seau taught me what I needed to do to make it in the NFL. I'll always admire him and respect our time spent together. RIPJuniorSeau

Vince Papale @83Invincible
RIP Junior Seau. A reminder we never know what someone else is going through. Be an inspiration to others,it could save their life

Max Starks IV (Pittsburgh Steelers) @maxstarks78
This a sad day for nfl players who were blessed to know junior seau. Great man to play against, but a better mentor & human being! #prayers

Tony Siragusa @TonySiragusa
I'm sick over the junior seau news !!!! He was a great man , father, player and friend r.i.p !!

Jay Glazer ‏ @JayGlazer
Wow, I'm just sick over the story of Junior Seau. Always loved whenever I got to be around him. One of the funniest dudes around. RIP man

Josh Elliott (ESPN/"Good Morning America" anchor) ‏ @JoshElliottABC
RIP Junior Seau. Interviewed him many times over the years in covering the NFL...was never anything but decent and kind. Terrible news.

Tom Arnold (actor) @tomarnold
RIP Junior Seau. Got to know him on the sports show and a bunch of charity stuff. Great guy. GREAT ballplayer. Respect to his family.

Kendra Wilkinson (reality TV star and NFL wife) @kendrawilkinson
I'm so sad. RIP JUNIOR SEAU. He was an amazing player and an amazing man. I looked up to him when I was young. :(

Carson Daly @carsonjdaly
So sad to hear about Junior Seau. Growing up in LA a big football fan he was a beast. I'm praying for his family especially his 3 kids. Wow

Shane Carwin (MMA fighter) @ShaneCarwin
WOW RIP Junior Seau. He will be remembered as his amazing on field talents. If you are depressed seek help as suicide is never the answer.