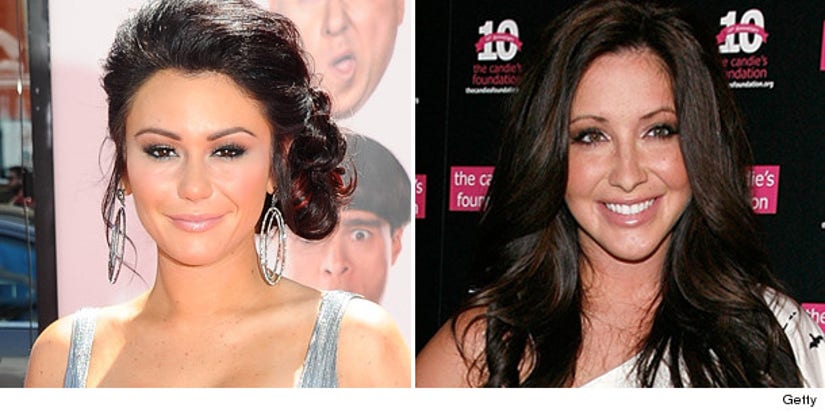 Usually Jwoww is fighting drunks in Seaside Heights, but today she's got her sights set on someone else: Bristol Palin.

The "Jersey Shore" star is picking a war or words with Sarah Palin's daughter after the 21-year-old mother slammed President Barack Obama for supporting gay marriage.

Earlier today, Bristol wrote a blog post called "Hail to the Chiefs -- Malia and Sasha Obama," where she ripped the President for allowing his daughters to influence his beliefs.

She writes, "While it's great to listen to your kids' ideas, there's also a time when dads simply need to be dads ... it would've been helpful for him to explain to Malia and Sasha that while her friends [same sex] parents are no doubt lovely people, that's not a reason to change thousands of years of thinking about marriage."

She added, "As great as her friends may be – we know that in general kids do better growing up in a mother/father home. Ideally, fathers help shape their kids' worldview."

Well, that didn't sit too well with Jenni "Jwoww" Farley.

"Bristol should keep her uneducated ignorant mouth shut," she tweeted after the story got pickup. "If Ur living in the past u wouldn't have a kid w/out marriage #hypocrite. It's 2012!"

Farley is of course referencing Bristol's son Tripp with Levi Johnston, who she had out of wedlock when she was 18.

Jwoww added "My best friend will get married one day and not just have civil union with his man. Stop hating people."

Whose side of the issue are you on? See who else supports the President's stance on gay marriage here ... and sound off below!