The 2011-2012 TV season is drawing to a close, but we're already getting a taste of what we can look forward to in the fall, thanks to the annual network upfront presentations held this week in New York City!

First up on Monday, NBC trotted out their stars for the press and major advertisers at Radio City Music Hall. 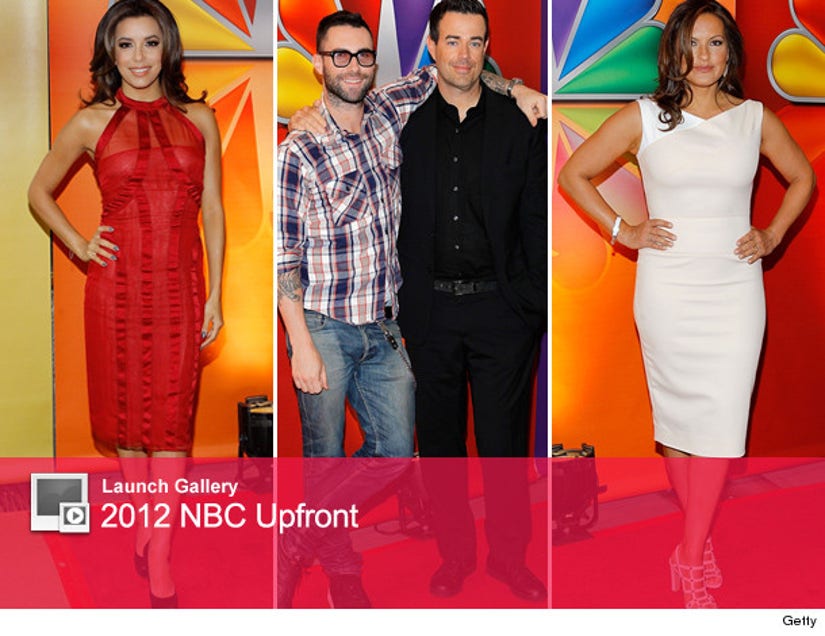 Network staples like Mariska Hargitay and Ice-T of "Law & Order: Special Victims Unit," Amy Poehler of "Parks and Recreation," Howie Mandel and Nick Cannon from "America's Got Talent," "Community" star Joel McHale and more hit the red carpet in support of their returning NBC shows. Carson Daly and Adam Levine were the sole red carpet representatives for "The Voice" -- Christina Aguilera and CeeLo Green were seen on stage, but neither posed for photos on the carpet.

Celebs who turned up to tout their new series included Eva Longoria for her new reality dating show "Ready for Love," Jenna Elfman and Bill Pullman for the political comedy "1600 Penn," Jamie Lynn Sigler, Jesse Bradford, Anthony Anderson and producer Jimmy Fallon for the comedy "Guys with Kids," and Phylicia Rashad and Stephen Pasquale for their mid-season medical thriller "Do No Harm." There was even a special appearance by "The Hangover Part II" star Crystal the Monkey, promoting her new show "Animal Practice!"

Click "Launch Gallery" above to see shots of all the new and returning NBC stars, and look below for the network's full fall schedule!