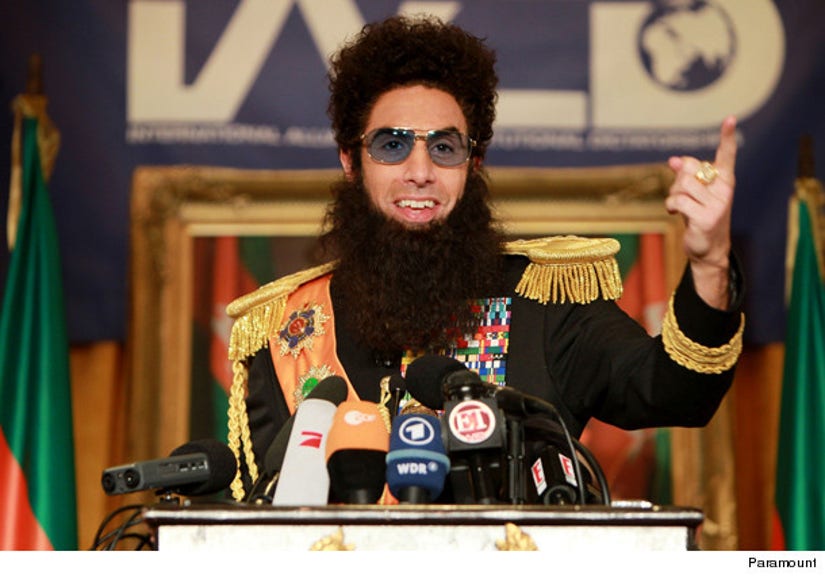 He's dumped the late Kim Jong-il's “ashes” on Ryan Seacrest and threatened Matt Lauer on the “Today” show. Sacha Baron Cohen is back to his insane antics in "The Dictator," which opens today. Co-starring Anna Faris and Ben Kingsley, the comedy follows Admiral General Aladeen, ruler of the fictitious North African country Wadiya, on his journey to address the United Nations in New York City.

In celebration of “The Dictator,” we've put together a list of ten memorable Sacha Baron Cohen quotes, ranging from Dictator General Aladeen, to Austrian fashionista Bruno, to Kazakhstan's own Borat, and all the way back to his days as Ali G. Enjoy and remember, it's all for fun!

General Aladeen: "I love it when women go to school. It's like seeing a monkey on roller skates -- it means nothing to them, but it's so adorable for us.

General Aladeen: "Ahmadinejad, he is still around, but he is still an embarrassment. He looks like a snitch on 'Miami Vice.' I mean, why does he not wear a tie? Does he think every day in Iran is Casual Friday?"

General Aladeen: "My favorite shows are Wadiyan. We have our version of 'Two and a Half Men.' It used to be called 'Three Men' but one of them tried to steal a grapefruit. Also, I love the TV program '24.' You have it here, but we play it backwards so it has a happy ending."

Borat: When you chase a dream, especially one with plastic chests, you sometimes do not see what is right in front of you.

Borat: Pamela, I am no longer attracted to you anymore... NOT!

Borat: This is Natalia [makes out with girl]. She is my sister. She is number four prostitute in whole of Kazakhstan!

Brüno: Looking up at the stars makes me think of all the hot guys in the world.

Ali G: With men and women, does you think that men should marry only one woman? Does you believe in mahogany?