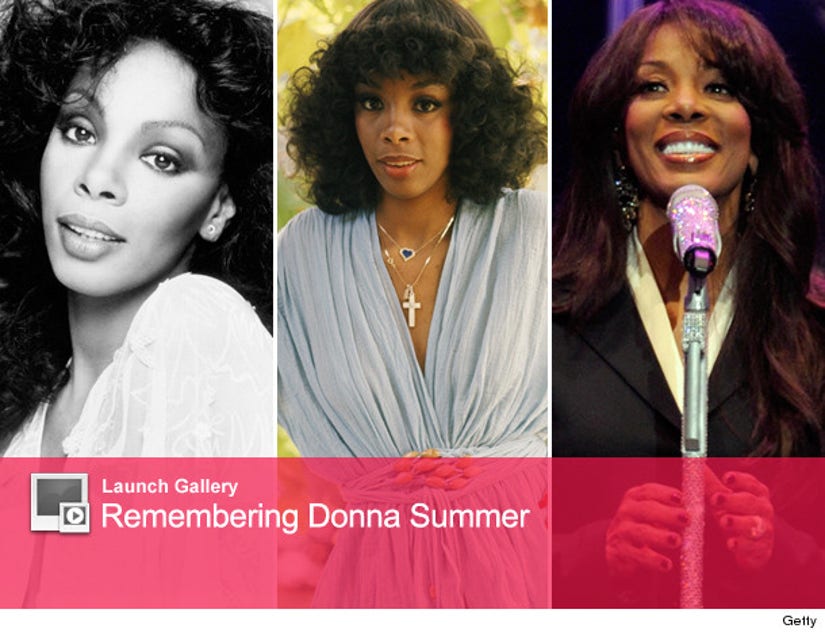 Disco superstar Donna Summer passed away this morning -- leaving behind a legacy of hits and a legion of celebrity fans.

The "Queen of Disco" died at the age of 63, after a battle with lung cancer.

Almost immediately after news broke, her fans took to Twitter to remember the star and offer their condolences.

Gloria Estefan @GloriaEstefan
Few singers have impacted music & the world like Donna Summer! It's the end of an era. Peace & prayers 2 all who loved her. I will miss her!

La Toya Jackson ‏@latoyajackson
My condolence to #Donna Summer's family & love ones. She will be terribly missed. She was truly the #Disco Queen!

Kelly Osbourne @MissKellyO
The queen of disco may have passed on but Donna Summer's legacy will live on forever! Tonight my last dance is in honor of you!

Morgan Fairchild ‏@morgfair
Donna Summer has died at 63 from cancer.Such a lovely woman & terrific talent whose music touched us all! Prayers for her & her family RIP.

Duran Duran @duranduran
So sad to hear about the passing of Donna Summer. Our condolences.

Katharine McPhee @katharinemchpee
RIP Donna Summer...hope you're dancing up there.

William Shatner @WilliamShatner
My heart and thoughts go out to the family of Donna Summer.

Daisy Fuentes ‏@DaisyFuentes
I will always love Donna Summer. So many wonderful memories. Such an amazing voice. A lovely lady. RIP Disco Queen.

Nigel Lythgoe ‏@dizzyfeet
One of my favorite singers of all time, Donna Summer, is dead. She defined dance music in the 70's and had a wonderful voice and personality

Lou Diamond Phillips ‏@LouDPhillips
RIP Donna Summer. So many memories from my adolescence I can't even begin to recount. Thanks for the joy & exuberance of dancing.

Timbaland ‏@Timbaland
this cant be tru. i cant believe this RIP Donna Summer. at a lost 4words

Questo of The Roots ‏@questlove
Donna Summer. Man I can't believe this--- like "My Baby Understands" was on my workout playlist this morning! This MORNING! God...I just...

Elise Neal @TheRealNealE
"Dim all the Lights" Disco LEGEND Donna Summer has died of cancer , your songs were a movement to my dancing years!!

Boyz II Men @BoyzIIMen
It's unfortunate that we have to say goodbye to another amazing talent. Donna Summer, Queen of Disco, our condolences to her family!

Morgan Fairchild @morgfair
Donna Summer has died at 63 from cancer.Such a lovely woman & terrific talent whose music touched us all! Prayers for her & her family RIP.

Caroline Manzo ‏@CarolineManzo
RIP Donna Summer - she was one of the best - sad.

I can't believe we've lost another wonderful singer. Donna, like Whitney, had one of the greatest voices ever. I loved her records. She was the disco queen, and will remain so. I knew her and found her to be one of the most likable and fun people ever. She will be missed and remembered.

Donna Summer used disco to bring the most unlikely people together -- blacks, whites & everyone in between. Donna was a role model, the consummate professional. Her guidance and inspiration will forever help me reach new heights as a performer. I cherish the days I toured with her. Love to love you, baby...truly. RIP.

I just heard the very sad news that Donna Summer has passed away. For me, there is no doubt that her song 'I Feel Love' had a dramatic effect on modern music. It was certainly a key influence on my work with Duran Duran. Together with producer Giorgio Moroder, Donna pioneered the use of electronic sequencers in dance music. Today that sound that seems so familiar, but in 1977, it was a brave new frontier. It's extremely rare that you hear one song that completely changes the way you perceive music. “I Feel Love” achieved that.

Five-time GRAMMY winner Donna Summer had a dynamic voice and unique musical style that helped define the dance music genre in the '70s. She also was an artist who crossed many musical genres, as evidenced by her GRAMMY wins in the R&B, rock, inspirational and dance categories. Her talent was a true gift to the music industry, and our thoughts and sympathies are with her family, friends and fans throughout the world during this difficult time.