If imitation is the sincerest form of flattery, then Kim Kardashian is definitely paying homage to some of Hollywood's leading ladies!

On Wednesday, Kim wore a Balmain Resort 2012 gold embroidered minidress to the premiere of beau Kanye West's short film, "Cruel Summer." She paired the look with her hair down and slicked back, and black ankle-high boots.

Zoe Saldana wore the exact same dress back in August to the screening of “Colombiana” and Alessandra Ambrosio donned the look in November to the Victoria Secret Fashion Show viewing party. Both the ladies stunned, pairing the curve-hugging gold garb with minimal jewelry and open-toe heels. 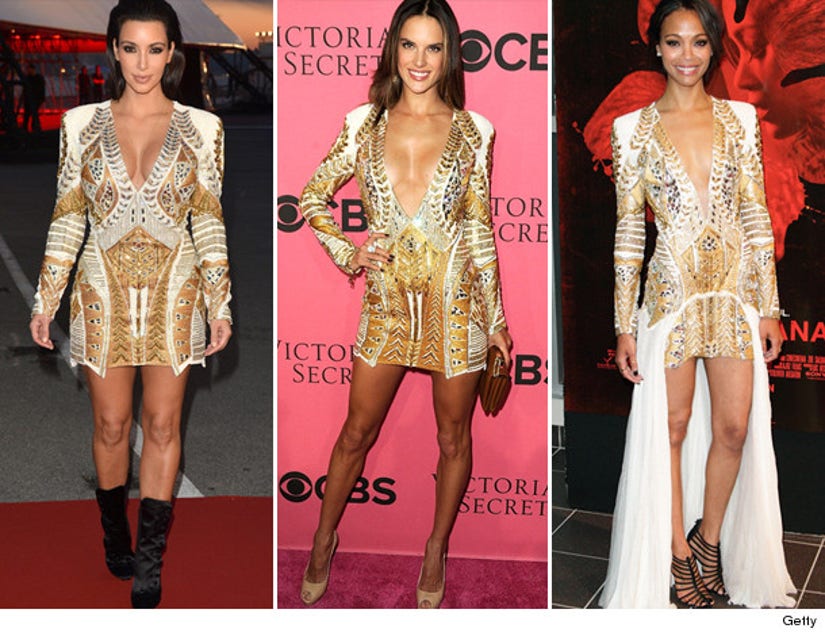 On Tuesday, the starlet looked gorgeous wearing a two-piece black lace Emilio Pucci gown to Diddy's yacht party in Cannes. Perhaps she drew some inspiration from Gwyneth Paltrow, who memorably wore the same dress to the 2011 Emmy Awards back in September.

Although Kim K looked great in the Emilio Pucci gown, we think she committed a fashion felony in the gold Balmain … the black ankle boots clashed with the intricate detail of the dress, and the casual footwear is definitely red carpet no-no!

Click “Launch Gallery” above to vote on who wore it better!

Also come back to toofab to see Kim at the amFAR gala -- we'll give you a hint -- she's wearing yellow!