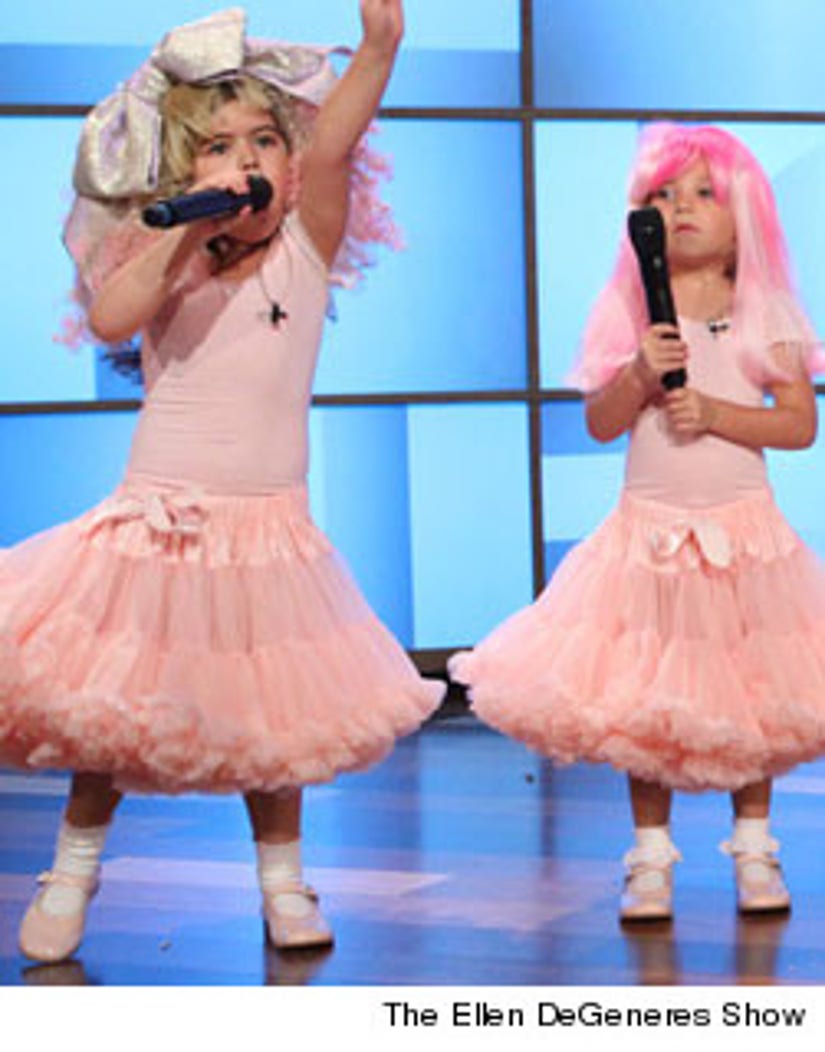 There are awards for everything these days, which is why we appreciate it when a show comes along offering prizes for "Most F'd Up Performance Gone Viral" and "Most Adorable Viral Star" (can you say Sophia Grace and Rosie?)! Ladies and gentlemen, meet the MTV's O Music Awards.

The show, now in its third year, honors achievements in the digital music realm, as well as those fun/crazy/messed up viral moments that we all love so much.

To top it all off, the show will be the "world's first live 24-hour moving awards show," as it will broadcast from a touring bus!

The band The Flaming Lips are attempting to break Jay-Z's record of Most Live Concerts Played in 24 Hours by performing eight shows -- from Memphis to New Orleans -- on June 27, and the O Music Awards are going along for the ride, broadcasting every moment of the way.

For more info and to vote for your favorites, visit the O Music Awards website here, and see below for all of the categories and nominees!

Description: Fan armies are like fan clubs of old – with Twitter. Dedicated to the band of their preference, they turn out in droves – digitally and physically – to support a band's every venture.

Description: Bands who are making 140-characters their bitch – without being management's bitch (IE, all tweets are their own – we think).

Description: The web is full of children and animals doing musical things adorably. Let us celebrate them!

Description: These musicians go above and beyond when it comes to their art. We're not just talking about people who use Twitter and dabble in digital music here – each and every one is an innovator, early adopter and deeply immersed in the music/tech scene. More importantly, they do it on their own, not at the behest of labels or managers.

Description: When we say "Innovative," we don't mean "well-directed" or "cool" – we mean folks who tapped into technology to create a new form of art: from choose-you-own-adventure masterpieces to 3D flicks to Kickstarter-funded opuses.

Description: These artists did not hit the big-time because they immediately scored a record deal or got "discovered" playing live. No, each and every one broke out because they used the web to get ahead – from Kickstarter-funded albums to songs that blew up on blogs to bands who met via email.

Description: Memes, random things, Internet weirdness that has to do with music. Rad.

Description: This category honors bands and musicians who have entered into the music tech scene as creators and innovators, backing and inventing new products and services in the digital sphere.

Description: Every year, we see old technology and trends coming back and working themselves into pop culture. In this category, we honor those trends that are making a comeback in the music world.

12. Beyond the Blog Award (Winner: Organization)

Description: The Beyond The Blog Award is honoring unconventional ways of editorializing music from radio to traditional magazines to using Twitter.

Description: Watching concerts online is an increasingly popular trend nowadays. This category honors people and technology that are enhancing that experience.

Description: Honoring apps and services that are doing awesome things with music and musicians.

Description: Anything and everything that was created during a Music Hack Day or any other hacking event.

Description: Musicians who take wonderful snaps with their mobile phones and then share them with us normal folks.

Description: Here we honor any mobile or web services that make listening to music a social experience.

Description: There has been a lot to get up in arms about this year. Luckily, people have the Web – and services like YouTube – as an outlet.

19. Beyond: The DJ: Most Innovative Solo Performer (Winner: Artist)

Description: Modern technology - both hardware and software — has birthed a band-new breed of musicians: Intrepid solo performers who both sample and blend the music of others into wholly new creations, and utilize programs and tools to create full, breathtaking songs without the aid of a band or other musicians. Like Djs, these musicians often take the stage solo, surrounded by sound boards and decked out in headphones, but instead of just spinning and mixing the tunes of others, they're creating original compositions that stand on their own.

Description: The gap between artist and fan is getting smaller and smaller with the rise of social media. These artists got even closer to their followers using digital tools – perhaps too close.

Description: In the past, if you botched a performance the masses would point, laugh and subsequently forget about it a few weeks later. Now, those FAILs are archived for future generations to mock on the World Wide Web.

Description: Thanks to the Web, users can teach themselves anything from the comfort of their own homes. Here are some of our favorite at-home teaching tools.

F*****d Up vs. Katy Perry
Patrick Carney vs. Everyone
David Furnish vs. Madonna
Frances Cobain vs. Courtney Love
Nicki Minaj vs. Her Twitter Followers

Description: Thanks to the Web, users can teach themselves anything from the comfort of their own homes. Here are some of our favorite at-home teaching tools.