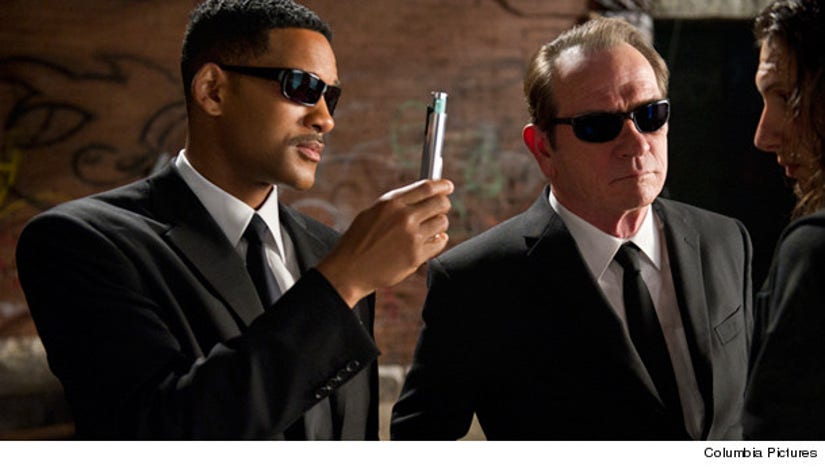 LOS ANGELES (AP) -- The comic action heroes of "Men in Black 3" have taken over the weekend box office from the comic-book superheroes of "The Avengers."

According to studio estimates Monday, Will Smith and Tommy Lee Jones' latest "Men in Black" installment debuted with $70 million domestically over the four-day Memorial Day weekend, which proved unusually quiet at theaters for Hollywood overall.

Sony's "Men in Black 3" took over the No. 1 spot from Disney's "The Avengers," which had been the top flick for three straight weekends but slipped to second place with $46.9 million domestically.

"We took over the world this weekend," said Rory Bruer, Sony's head of distribution. "It's so exciting to see Will and company back in this franchise. I certainly think that most people who've seen the film think it's the best of the franchise."

"The Avengers" raised its domestic total to $523.6 million, making it the No. 4 movie on the all-time domestic revenue chart and only the fourth film to top half a billion dollars. "The Avengers" will quickly pass the No. 3 film, "The Dark Knight" at $533.3 million, leaving only "Avatar" at $760.5 million and "Titanic" at $658.5 million ahead of it.

While it was a good start for "Men in Black 3" and another strong hold for "The Avengers," Memorial Day weekend was the slowest at theaters in more than a decade. Box-office tracker Hollywood.com estimates that overall domestic receipts for the four days will finish at $190 million, the lowest since Memorial Day weekend in 2001, when revenues totaled $185.3 million.

A year ago, Hollywood pulled in a record $276.3 million over Memorial Day weekend, when "The Hangover Part II" debuted with $103.4 million.

So far, Hollywood's summer season has been a one- or two-hit wonder, with only "The Avengers" doing blockbuster business and now "Men in Black 3" joining it with a solid opening.

Estimated ticket sales for Friday through Monday at U.S. and Canadian theaters, according to Hollywood.com. Where available, latest international numbers are also included. Final domestic figures will be released Tuesday.