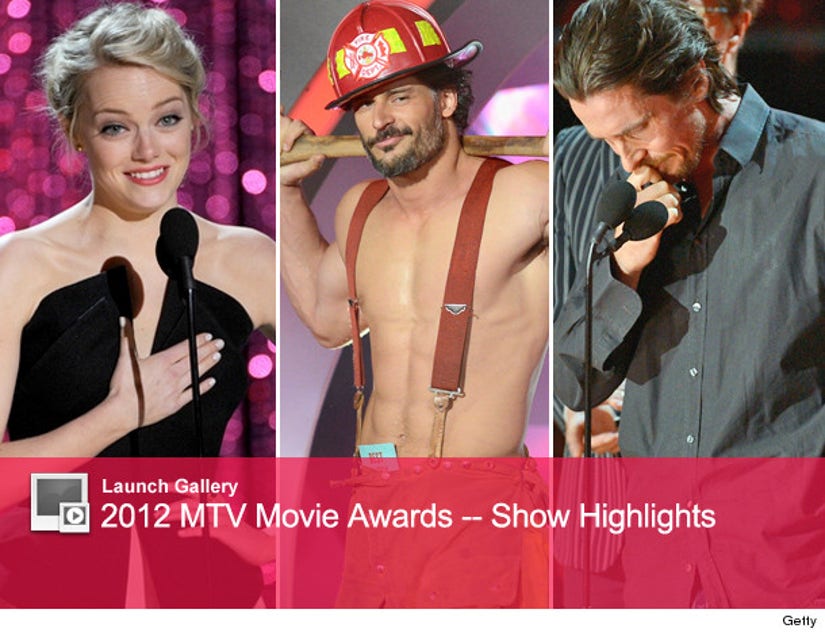 It was a very eventful night at Universal City's Gibson Amphitheatre for the 2012 MTV Movie Awards -- where "The Twilight Saga: Breaking Dawn -- Part 1" took home the big award of the night for Best Movie.

Both Emma Stone and Christian Bale got emotional when it was their turn at the mic during last night's awards show.

Bale got choked up after seeing a clip of Heath Ledger, holding back tears as he said "It's great to see Heath Ledger up there."

Stone teared up too while accepting her Trailblazer Award, giving an inspirational message as part of her speech -- telling the crowd "What sets you apart can sometimes feel like a burden and it's not. And a lot of the time, it's what makes you great."

It wasn't all tears though. Joe Manganiello showed off his hot bod, Kristen Stewart made out with herself, Mark Wahlberg almost beat down an audience member and Jennifer Aniston was officially called a "Dirtbag."

See the best show moments in the gallery above and check out the full list of winners below: