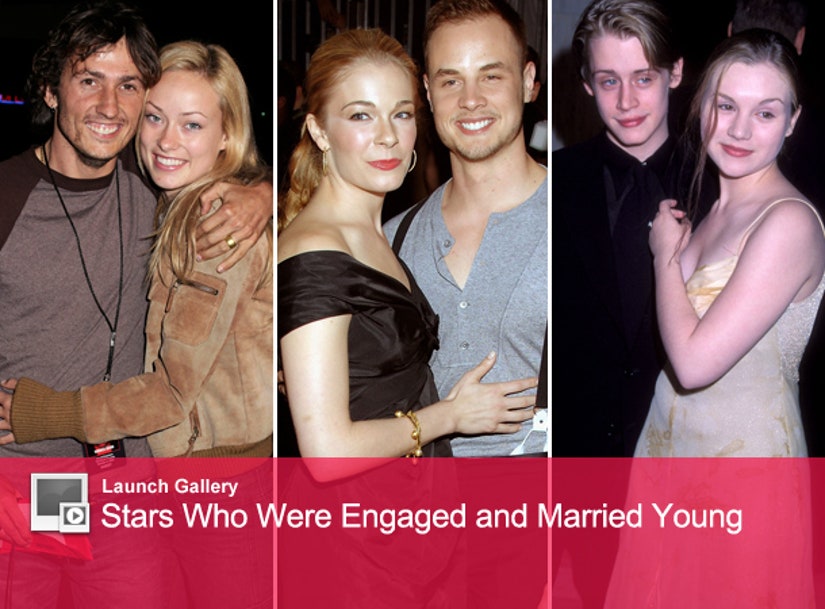 When Miley Cyrus, 19, and Liam Hemsworth, 22, announced their engagement, some found the news shocking considering the Disney starlet is still a teen.

Many celebs have gotten engaged and even tied the knot at very young ages (some even younger than Miley)! Some of the marriages worked out, but for most, wedded bliss became a wedded miss.

Olivia Wilde wed filmmaker (and real-life prince) Tao Ruspoli in 2003 at the tender age of 19 … but after a good run, the two called it quits in 2011. LeAnn Rimes tied the knot with Dean Sheremet when she was just 18 in 2001. But after nine years of marriage, LeAnn filed for divorce ... around the same time claims surfaced about Rimes' affair with "Northern Lights" co-star Eddie Cibrian. Both the actors left their spouses the same year, and wed the very next in 2010.

And Macaulay Culkin was another celeb to get hitched in his teens, he said “I do” to fellow child star Rachel Miner at the barely-legal age of 18 in 1998. The pair's romance didn't last for long and ended two years later.

While Miley and Liam are reportedly not rushing to the aisle anytime soon, they're definitely not alone in young Hollywood. But judging from their fellow stars' not so happy endings, maybe the twosome should try the engaged thing for a few years before rushing to the altar.

Click "Launch Gallery" above to see all the stars who got engaged and married at a young age!