Kanye West turns 35 years old today, and in celebration of the self-declared king of rap…we've compiled a list of some of his most outrageous moments!

Who can forget when he charged the stage at the 2009 MTV Music Awards during Taylor Swift's acceptance speech for Best Music Video. Not only did Kanye face huge criticism from Beyonce and the public, but his actions turned Swift into America's sweetheart.

That wasn't the first time West pulled a stunt like that; after Gretchen Wilson won for Best New Artist at the 2004 American Music Awards, Kanye told reporters that he felt like her was “robbed” because he believed that he should have won Best New Artist of the year. 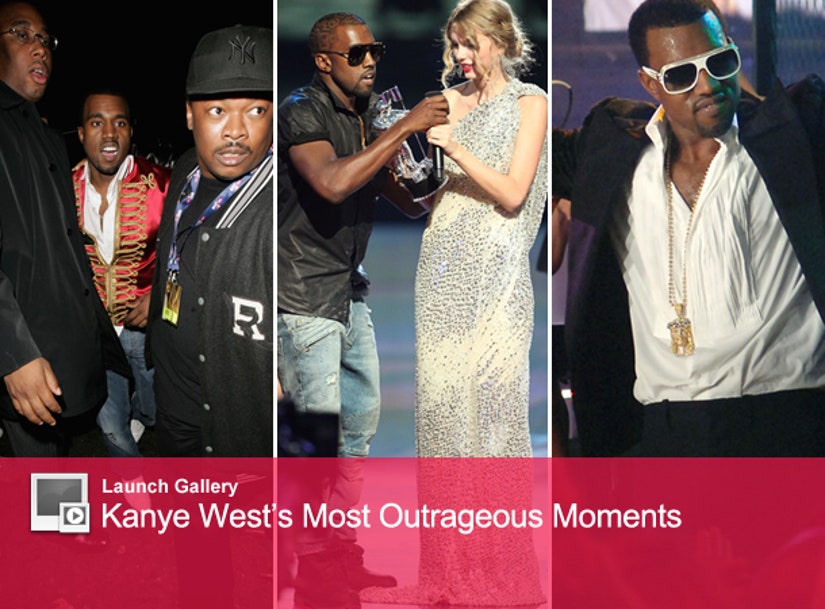 It took an episode of "South Park" in 2009 which made crude references to Kanye's overly outspoken character to finally soften the rappers demeanor. Taking to his blog the artist confessed (in all caps):

“I ACTUALLY HAVE BEEN WORKING ON MY EGO THOUGH. HAVING THE CRAZY EGO IS PLAYED OUT AT THIS POINT IN MY LIFE AND CAREER. I USE TO USE IT TO BUILD UP MY ESTEEM WHEN NOBODY BELIEVED IN ME. NOW THAT PEOPLE DO BELIEVE AND SUPPORT MY MUSIC AND PRODUCTS THE BEST RESPONSE IS THANK YOU INSTEAD OF "I TOLD YOU SO!!!"

We all know that Kanye's a little full of himself but we're hoping that as he becomes wiser with age, he'll be slightly more modest too. Who knows, maybe Kim Kardashian will make the rapper a very happy hubby one day!

Click "Launch Gallery" above to see all of Kanye's most shocking moments!