It's a fashion face-off of three Hollywood starlets in the same Keepsake dress … so who wore it better?

Last night in Beverly Hills, TV's biggest stars hit the red carpet for the 2012 Critics' Choice Television Awards … and mini dresses were definitely the go to look for the night!

Among those rocking knee-high garb was Hayden Panettiere who donned a flowy aquamarine Keepsake "Lost Without You" dress with side cut-outs at the waist. The "Heroes" star looked sweet, wearing her hair loosely pinned back, pairing the look with nude open-toe heels and a gold clutch.

But it was dress déjà vu … maybe because both Nicky Hilton and Nicole Richie wore the same outfit last year!

Hilton sported the same ensemble to a DSQUARED 2 Designers and VMAN Magazine dinner party last December. The Hilton sister kept the look casual, opting for nude peep-toe pumps, and a tan J.J. Winters' envelope clutch to finish the look. She styled her hair straight and went with light makeup -- and the blue shade of the dress made her blue eyes pop! 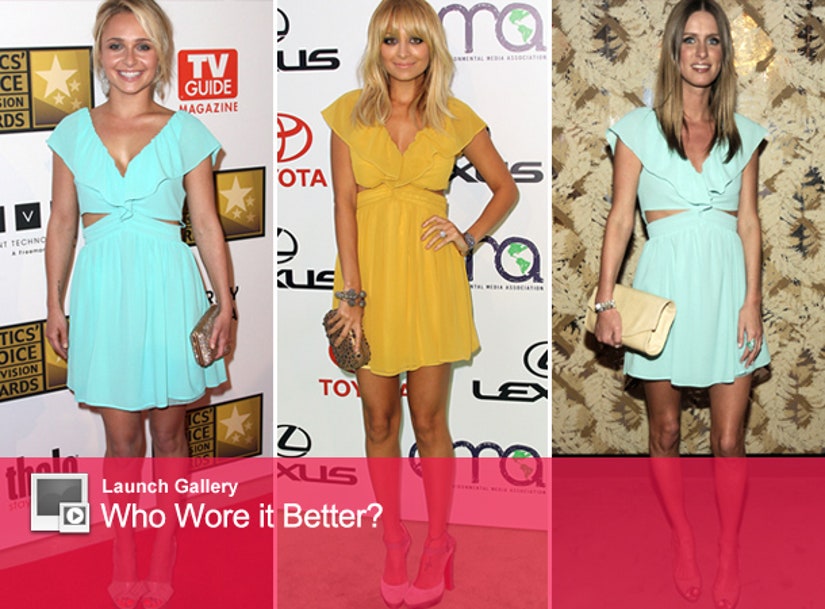 But it was fashion guru Nicole Richie who wore the Keepsake cut-out dress first, except Richie donned the dress in yellow to the 2011 Environmental Media Awards in October. She accessorized the outfit with her very own copper House of Harlow "Tilda" studded clutch and taupe Christian Louboutin "Luxura" heels. Nicole styled her hair in free flowing waves and sported thick black eyeliner giving her dress an edgier look.

While each of the ladies look lovely in the Keepsake dress, we think Richie wins this battle -- leave it to the fashion designer to make the dress look super chic! We love the yellow version and her bronze clutch and Louboutin pumps really give the dress a rock star feel!

If you like the look you can pick it up at from Singer22.com!

Who do you think wore it better? Let us know and click "Launch Gallery" above to see all the stars in dueling dresses!