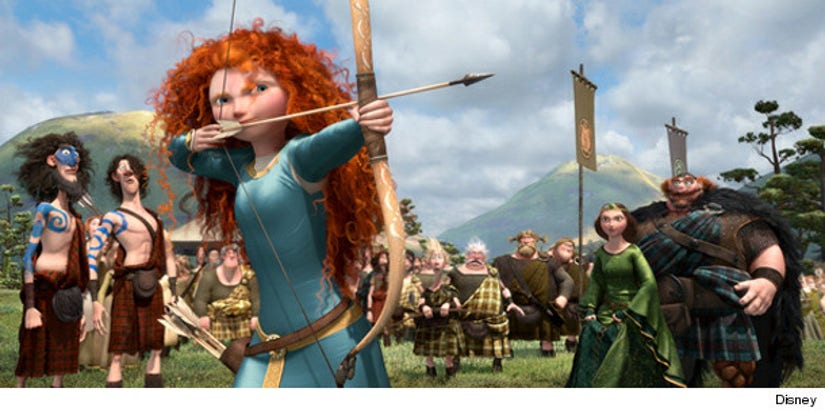 LOS ANGELES (AP) -- A new Disney princess has ascended to the box-office throne with a No. 1 debut for Pixar Animation's "Brave."

The latest from the makers of "WALL-E," "Finding Nemo" and the "Toy Story" movies opened with $66.7 million domestically, according to studio estimates Sunday. "Brave" added $13.5 million in 10 overseas markets for a worldwide start of $80.2 million.

Featuring a feisty Scottish princess, "Brave" was the first of Disney's Pixar animations with a female protagonist. And it left American hero Abraham Lincoln in the dust.

The 20th Century Fox action tale "Abraham Lincoln: Vampire Hunter" opened far back at No. 3 with $16.5 million, behind "Madagascar 3: Europe's Most Wanted."

DreamWorks Animation's animated "Madagascar" sequel had been No. 1 for two weekends and added $20.2 million to raise its domestic total to $157.6 million.

"Brave" is the 13th-straight Pixar release to open at No. 1 since "Toy Story" launched Hollywood's age of computer animation in 1995.

"Their track record is just unbelievable," said Paul Dergarabedian, analyst for box-office tracker Hollywood.com. "The Pixar brand just carries so much weight with the audience, it doesn't matter almost what the story is about if it has the Pixar name."

The weekend's other new wide release, Steve Carell and Keira Knightley's apocalyptic romance "Seeking a Friend for the End of the World," misfired with just $3.8 million, debuting at No. 10.

The Focus Features film, playing in much narrower release than other top-10 movies, stars Carell and Knightley as heartbroken neighbors on a road trip as a killer asteroid hurtles toward Earth.

Woody Allen's Italian romance "To Rome with Love" pulled in huge audiences in limited release, debuting with $379,371 in five theaters. That gave the Sony Pictures Classics release a whopping average of $75,874 a theater, compared to $16,028 in 4,164 cinemas for "Brave."

"Brave" features a voice cast led by Kelly Macdonald and Emma Thompson in a mother-daughter story of a young Scottish princess defying tradition that requires her to marry against her will.

The film proved that audiences will turn up for a female hero, not just the male protagonists of past Pixar flicks, such as Woody and Buzz of "Toy Story," the robot of "WALL-E" or the rat and his chef buddy of "Ratatouille."

"Brave" matched the $66.1 million debut of Pixar's "Cars 2," with male automotive lead Lightning McQueen, over the same weekend a year ago.

Estimated ticket sales were for Friday through Sunday at U.S. and Canadian theaters, according to Hollywood.com. Final domestic figures will be released Monday.