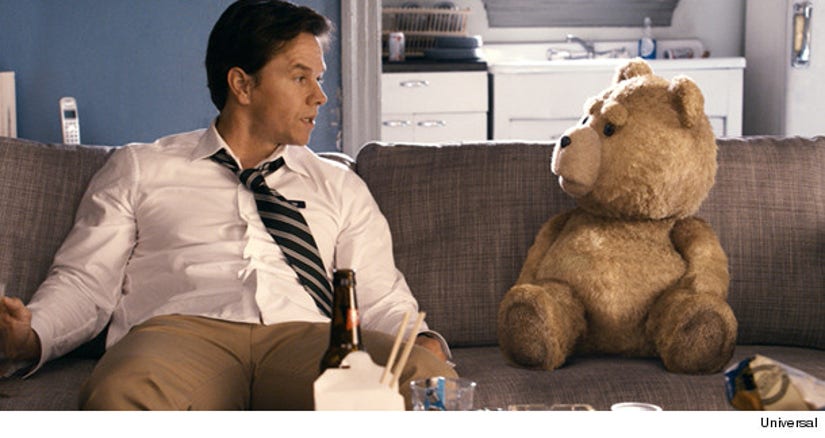 Warning: Parents, if your kids beg you to take them to the movie with the cute, Snuggle-looking bear in the commercials ... just say no. Trust us.

"Ted" may appear to star a sweet and cuddly stuffed toy, but really he's a vulgar, cynical stoner (voiced by "Family Guy" creator Seth MacFarlane, who also wrote and directed the film) who picks up hookers and belts out '90s songs during a coke-fueled karaoke session. Seriously.

The story follows the tale of John (Mark Wahlberg), a bullied Boston kid who's given a teddy bear for Christmas, then wishes that it come to life so the pair can be best friends forever.

When the bear reveals his new walking and talking powers, he becomes an overnight celebrity -- featured on the local news, visiting the Johnny Carson show, and eventually succumbing to the usual child-star downfall and arrests.

The flick catches up with John and Ted almost 30 years later -- beer-guzzling, pot-smoking roommates with little direction in life. John is a slacker car salesman who's somehow landed the stunning Lori (Mila Kunis), a driven career woman with the patience of a saint to put up with the bumbling duo. And Ted is, well, Ted.

Given an ultimatum from Lori, John realizes that his pint-sized pal is the one holding him back from growing up ... and something needs to change.

All in all, the flick is an enjoyable but crude romp, littered with the typical MacFarlane pop culture references and self-reflexive humor that we get from "Family Guy" and his other projects.

Wahlberg shows off some great comedic chops that we rarely get to see from him, and expertly acts the part of a guy who refused to grow up ... or just couldn't. Plus there's a bonus for you ladies -- if all the "Magic Mike" screenings are sold out, this is a nice alternative as you get a really great butt shot of the sexy 41-year-old!

The CG work on the bear is absolutely amazing, especially during a pretty epic fight between the best friends, and there are some awesome and unexpected cameos in the film that deliver pretty great laughs.

The flick did feel a little long which shouldn't be expected with a running time of less than two hours, but if you're looking for a mindless comedy and appreciate crude humor, you won't mind at all.

"Ted" is in theaters now.