Pamela Anderson has spent much of her life being the best-looking woman in whatever room she happens to be in. She's weathered some seriously strange life events -- the leak of an X-rated video featuring then-hubby Tommy Lee, multiple marriages/divorces, and who knows what else -- and has remained successful and stunningly gorgeous.

Now the "Baywatch" babe is — wait for it — 45-years-old! In honor of her special day, our friends at Snakkle.com help us look back at some shots of the stunner through the years!

Aw! It's Pam's baby picture! Clearly this beauty was not camera-shy, even way back when. Pam was born in Canada -- specifically Ladysmith, British Columbia. We like that name. It suits her.

Pam in high school! Her hair may have been different back then, but we'd recognize that smile anywhere!

Pam was about 16-years-old in this pic from 1983. She's clearly a cutie, but we're going to go out on a limb and say she didn't fully blossom into the stunner we've all grown to love until she was a bit older.

Pamela Anderson as the Blue Zone Girl in 1989

Pamela's career began in 1989 -- she went to a Canadian Football League game and wound up on the big screen, wearing a Labatt's beer t-shirt. The crowd went wild, so her boyfriend made this poster of Pam as The Blue Zone Girl. Within months she was on the cover of "Playboy." Clearly it pays to be good-looking!

Pamela Anderson on the Cover of Playboy Magazine in 1989 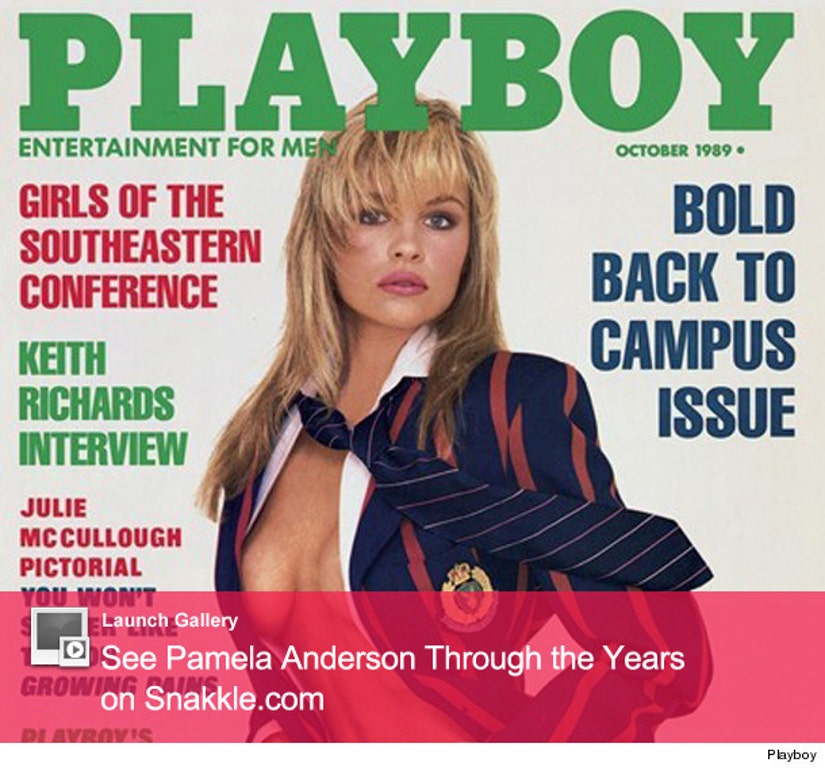 After being discovered at the CFL game, Pam quickly made the cover of “Playboy” in October of 1989. Shockingly, she was a hit with “readers.” This is the first of many times Pam has graced the cover of Hugh Hefner's legendary magazine for men … for men who like to “read.”

Soon after, Pam moved to Hollywood where she landed the role of the "Tool Time Girl" on the sitcom "Home Improvement," and, as they say, the rest is history...

Click "Launch Gallery" above to see more shots of Pam through the years. Happy 45th!