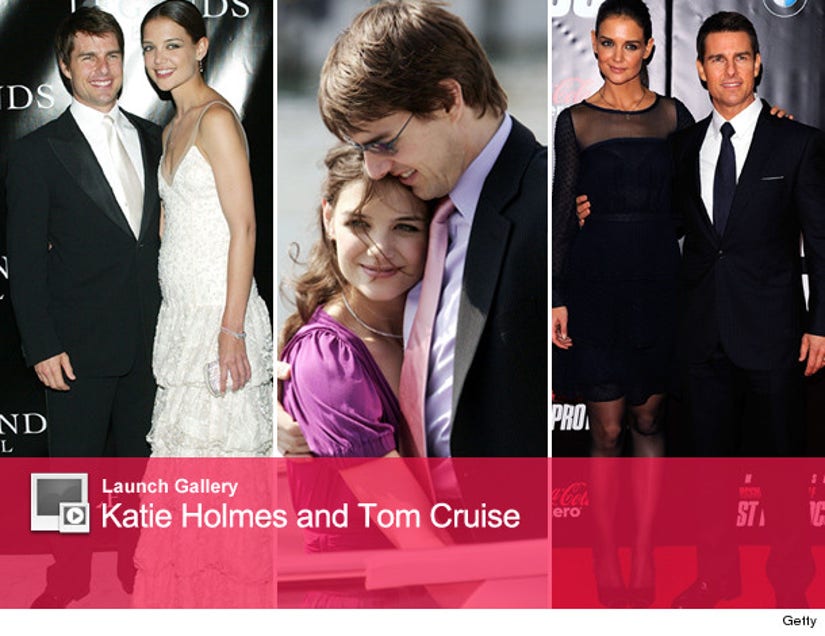 While it seems everyone is still reeling over the news that Katie Holmes has filed for divorce from Tom Cruise, we thought we'd take a look back at the couple in happier times.

Here is a timeline of the pair's whirlwind May-December romance.

October, 2004: Katie tells Seventeen magazine: “I think every little girl dreams about (her wedding). I used to think I was going to marry Tom Cruise.” Tom is 16 years her senior.

April 27, 2005: While in Italy, Tom and Katie take their new romance public. The coupling comes just shortly after her split from fiance Chris Klein.

April-June, 2005: The couple goes PDA-crazy during red carpet appearances at the David di Donatello Awards and Oprah Winfrey's Legends Ball, as well as her film "Batman Begins" and his "War of the Worlds."

May 23, 2005: Cruise appears on "The Oprah Winfrey Show" and infamously goes a little nutty while talking about his new love. Everyone remembers the couch jumping, right?

June 13, 2005: Katie announces she is converting from Catholicism to Scientology.

April 18, 2006: Holmes gives birth to the couple's only child together, a daughter named Suri.

October, 2006: The family, including Suri, appears on the cover of Vanity Fair magazine in photos taken by Annie Liebovitz.

November 18, 2006: The couple weds in a Scientology ceremony at the 15th-century Odescalchi Castle in Bracciano, Italy.

June 28, 2012: Holmes files for divorce from Cruise, citing "irreconcilable differences." She is asking for sole legal custody and "primary residential custody" of Suri.

Click "Launch Gallery" above to see shots of happier TomKat through the years.