The Wizard of Oz is back ... and he looks amazing!

Disney rocked Comic-Con today with their presentation, which included an audience-only peek at "The Lone Ranger," a new "Frankenweenie" trailer, and the first footage from "Oz the Great and Powerful" – and it looks AMAZING!

Billed as a prequel to "The Wizard of Oz" tale we all know, the Sam Raimi-directed fantasy adventure follows Oscar Diggs (James Franco), a magician from Kansas who's taken by storm (literally) to the colorful land of Oz.

Enter witches Theodora (Mila Kunis), Evanora (Rachel Weisz), and Glinda (Michelle Williams), who aren't so sure that Oz is all he's cracked up to be, but it's up to him to figure out who's good and who's bad and hone his magical talents before he can become the powerful Wizard of Oz.

This trailer gave us chills! The visuals are absolutely stunning, even for the actors -- Mila herself described being on set as “magical."

Fun Fact: Missing the famous ruby slippers in the trailer? Sad to say, but they won't be appearing in the film! Apparently there was a copyright issue. Boo! But we're still super excited to see the "Oz the Great and Powerful" when it hits theaters in March.

Done like an old movie newsreel, and as an homage to the classic horror films that inspired Burton to make the film, the new trailer gives us even more footage from the black-and-white tale of a boy and his (reanimated) dog. Check it out!

Fun Quote: During the Q&A, an audience member asked Burton why his regular cast member Johnny Depp wasn't in the flick. His reply? "I've moved on from Johnny Depp to dogs and puppets!"

Special goodies that were presented only to audience members also included 10 minutes of the animated "Wreck-It Ralph," and from what we hear, it's super cute!

Much like the trailer we've all seen, the cameos from other video game characters are still great and the voice acting from John C. Reilly, Jane Lynch, Sarah Silverman and Jack McBrayer is spot on. We can't wait to see it in theaters November 2! 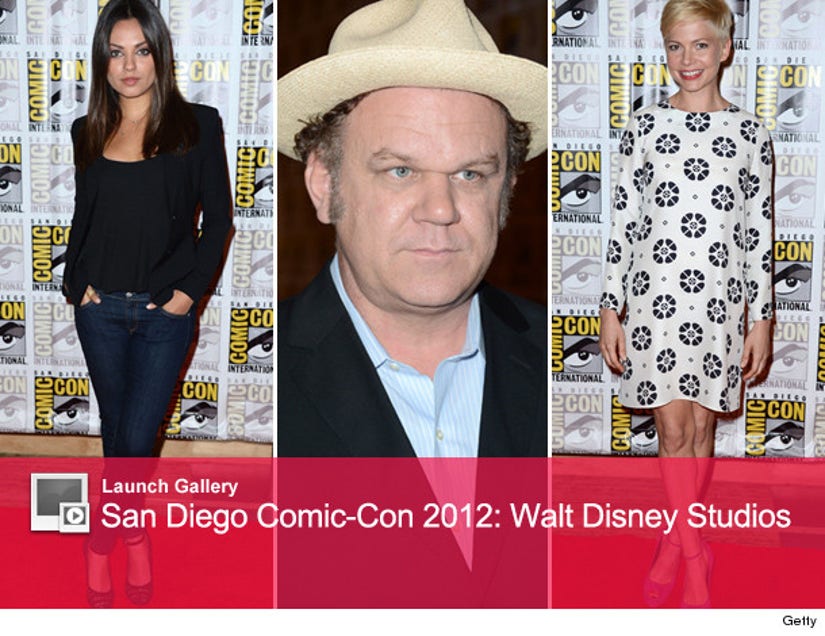 And finally, the lucky attendees in Hall H in San Diego today were treated to the first footage from Mr. Depp's anticipated, Gore Verbinski-directed "The Lone Ranger!"

Our toofab attendee tells us that everyone went crazy whenever Depp appeared on the screen as Tonto. It seems the title may be Armie Hammer's character, but it's Johnny's movie to steal.

Guess we'll find out when the movie comes to theaters in July 2013.

Which Disney title are you most excited about? Let us know below!