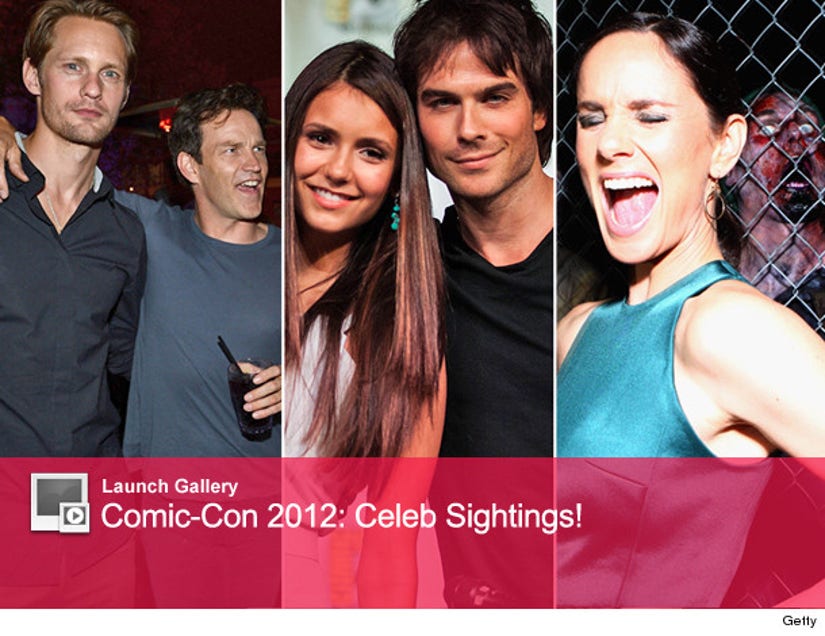 It's not all about comic books at Comic-Con -- and this year, a ton of celebrities went to San Diego for some premieres, panels and parties!

The cast of "True Blood" was all over the place. After holding a press conference on Saturday, they went out for a cast dinner before attending the Entertainment Weekly party and then their own party hosted by Playboy.

Pregnant Anna Paquin didn't make it to any of the parties though -- as Stephen Moyer was heard telling reporters she was resting back at the hotel and he couldn't wait to join her.

Inside the "True Blood" bash, Alexander Skarsgard was great with fans, we saw him posing with everybody who walked up to him!

Those other bloodsuckers from "The Vampire Diaries" made the rounds too. Ian Somerhalder and Nina Dobrev attended the Maxim party on Friday before doing Saturday's panel.

They were joined by costars Paul Wesley, Torrey DeVitto, Steven R. McQueen and Matt Davis for the Warner Bros. Television bash and the Entertainment Weekly party. Wesley was also seen getting inside the famous Batman "Tumbler" from "Batman Begins."

The Wired Cafe played host to a ton of stars as well -- as Anna Kendrick, Thomas Jane, Joe Manganiello, Kristen Bauer van Straten and stars from "Game of Thrones" all hung out there to relax and pick up some swag during the day.

The cast of "The Twilight Saga: Breaking Dawn -- Part 2" had its own party on Wednesday night -- and some of the stars went to go greet fans waiting in line for the panel on Thursday morning.

And finally, "The Walking Dead" celebrated the 100th issue of the comic book with a big bash that was attended by the cast of the AMC hit series. The party was held at Petco Park, where a Walking Dead obstacle course was set up -- see more pics from that here.

Check out all those celeb sightings and many, many more in the gallery above!