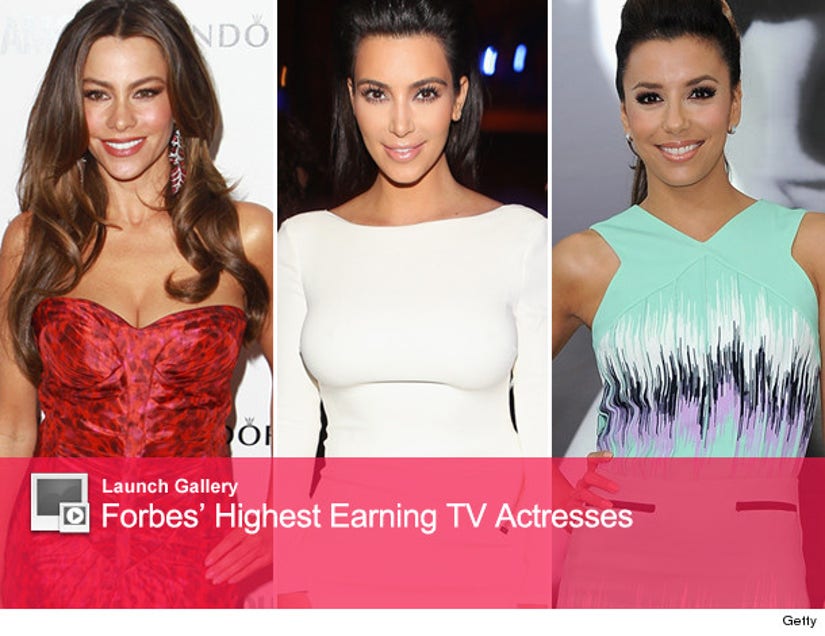 Forbes just released its May 2011-May 2012 list of television's highest earning actresses … and it looks like brunettes do it best!

Raking in the most cash this year is sizzling "Modern Family" star Sofia Vergara!

While the Colombia native is well known for her sexpot role on the show, off-screen she's an entertainment tycoon -- and this was definitely the bombshell's year!

Between her TV role, her own media company, endorsement deals with Cover Girl and Diet Pepsi and a clothing line with Kmart, she reportedly earned a hefty $19 million!

Coming in at number two is reality megastar, Kim Kardashian. Thanks to her massively popular reality shows and wedding special, along with her fragrance and clothing lines, she's earned a whopping $18 million!

Her “momager,” Kris Jenner, must know what she's doing because Khloe Kardashian also made the list -- coming in at number five.

Rounding out the top three is "Desperate Housewives" star Eva Longoria. Even though Longoria will have to say goodbye to the $375,000 she was making per episode on the just-ended show, she already has two new projects in the works, plus she's the face of L'Oreal Paris and Pepsi.

All things combined, she's made a cool $15 million for the year!

See who else makes the top 10 by clicking “Launch Gallery” above -- do you think these TV stars are worth their earnings? Sound off below!

And be sure to check out Forbes' website for a breakdown of the numbers.