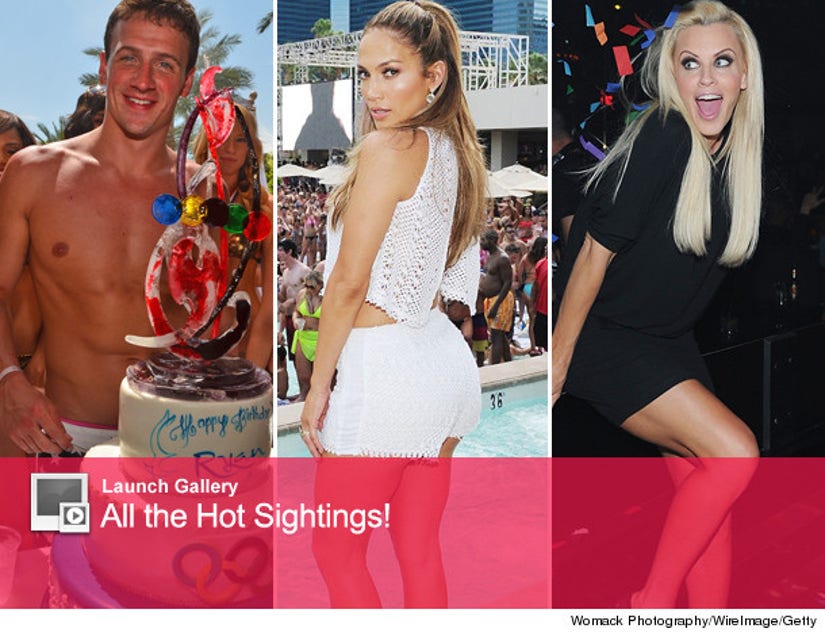 It was a wild weekend in Las Vegas -- where even Prince Harry showed up to party shirtless by one of the Strip's many pools!

Wet Republic at the MGM Grand was definitely the place to be seen on Saturday, with Jennifer Lopez showing up for a pre-concert bash with boyfriend Casper Smart and BFF Leah Remini.

J.Lo clearly does everything in style, showing up in snakeskin heels and a sexy crocheted two-piece outfit and holding a very expensive Birkin bag. We're told she was seen eating french fries and drinking non-alcoholic pina coladas -- don't want to get tipsy before a show!

But she wasn't the only big name by the MGM pool that day. Prince Harry was also in the house!

While only a lucky few got photos of him, Harry and a group of friends reportedly spent the day swimming, drinking and chatting up all the people by the pool -- and did most of it shirtless!

Check out the photos of Harry here.

Later that night, Lopez had a post-concert party at PURE inside Caesars Palace, where she was seen dancing on top of the club's booths with Casper ... who didn't leave her side all night.

In other pool party sightings, Olympic medalist Ryan Lochte kept cool at Azure at The Palazzo -- showing off his fit physique in two different swimsuits. Ryan hit the blue carpet in a patriotic number before changing into a bright pink Speedo.

Lochte was seen getting a birthday cake from a couple sexy women in gold bikinis before hitting the hotel's casino, nightclubs and restaurants.

And last, but certainly not least, is Jenny McCarthy -- who stepped out for the first time since announcing her split from boyfriend Brian Urlacher.

McCarthy looked great at 1 OAK Nightclub at The Mirage Hotel & Casino, showing off her hot legs in a sexy black mini-dress.