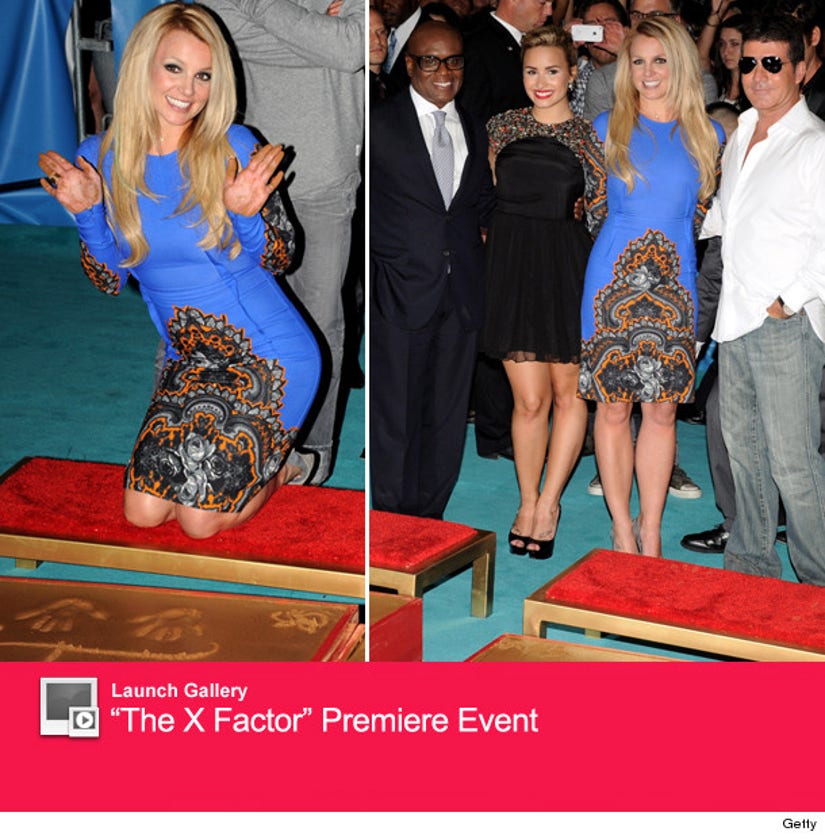 "The X Factor" had its big Season Two premiere party last night in Hollywood -- and we were lucky enough to catch a first look at the new, Britney Spears-starring show. So ... how was it?

Check out the photos above to see Britney, Demi Lovato, Simon Cowell and L.A. Reid get their hand and foot prints immortalized in cement in front of Grauman's Chinese Theater -- then keep reading to see what we liked (and didn't like) about the re-worked reality show.

10 Things to Know About "The X Factor" Season Two:

It's clear that Britney Spears is the main draw to the new season -- and after paying her $15 million to do the show, you better believe they're using her as much as possible.

She's a HUGE star and it's apparent at every stop they make in the premiere, with young women literally breaking down in tears when she walks into the room.

As for her judging skills, she's got a mean streak. And while some of her critiques come off stiff and/or rehearsed, there are true glimpses at the real Spears -- especially in cute and candid backstage video of her, Demi and Simon getting ready for their big debut. The behind-the-scenes stuff is great.

We had our doubts about Demi joining the judging panel, especially after Simon repeatedly called her a "brat" while promoting the show -- but she's a great addition. Instead of Nicole Scherzinger's fake crying and over-the-top antics, Demi seems more natural and brings a much needed youthful presence to the panel.

She also has some amazing fans. At the premiere event last night, the so-called "Lovatics" were as vocal (if not more) than everyone there for Britney. They know Demi's had a rough few years and they're ready to support her.

The two-hour premiere leads up to one very emotional audition from a former bullying victim. Through tears, the young woman praises Demi for being such a vocal anti-bullying advocate ... while revealing the two have similar "Stay Strong" tattoos.

And if that's not moving enough, her version of Jessie J's "Who You Are" is one of the most heartfelt auditions we've ever seen. It's done with so much feeling, Demi gives the girl a hug at the end ... and Simon admits he even had tears in his eyes watching it.

While the episode has some high moments, like the one above, it also gets really uncomfortable ... especially for Ms. Spears.

At one point one of her old duet partners, Don Philip, shows up to audition. Though Britney recognizes him from their days recording together, it's clear a lot has changed for him in 10 years, including his voice.

It's painful to watch him sing for them. You can tell Britney wants him to be good, but he isn't ... and seeing the panel tell the guy singing just isn't for him is heartbreaking. He's just an emotional wreck.

Britney also gets creeped out by a 50-year-old man who sings about candy, an audition Demi told the audience last night was the weirdest one they'd seen.

5.) Looks can be deceiving

These audition rounds are full of crazily dressed awful singers -- and most of them get an immediate boot from the competition. But this year, there's one who will really surprise you. We won't spoil it here, but let's just say Lady Gaga will be proud.

6.) Teenage girls will love it

There's some teenage eye candy for all the young ladies out there, including one 13-year-old Justin Bieber look-alike with an impressive voice.

Another boy group, Emblem 3, also stood out ... especially for Demi Lovato! The guys, 19, 18 and 15, had a very Sublime-like, SoCal sound, and the surfer boy looks to match. Demi was smitten ... and we think the public will be too.

7.) Two of the best singers are young women

Like winner Melanie Amaro, once again it's the ladies who are the early standouts. The first audition of the show was a 19-year-old mother-of-one ... and her voice and stage presence are amazing. She's a pop star in the making and her daughter is adorable. Britney's moments with the little girl are also super cute.

Another girl, just out of high school, is clearly an early favorite after blowing the panel away with a sexy rock version of Grace Potter and the Nocturnals' "Paris." Trust us when we say this is the one to watch.

In a format change, viewers will get a better look at what the contestants go through when they arrive. Wannabe contestants are mic'd from the second they show up as cameras shoot them from afar for a voyeuristic feel. It takes a little to get used to, as the contestants act like they're not being filmed but clearly know they are ... but it does bring something new and interesting to the show.

When she's not sipping on her her Pepsi or biting her fingernails, Brit Brit can usually be seen chewing gum at the panel. Some things never change.

10.) Mean Girls will get their due

Much of the first hour is built around a blonde, Lindsay Lohan look-alike and her sister, who give their bitchy banter on every contestant they see. Don't worry ... she'll get what's coming to her.

In short, it's definitely a different beast this year, but the new "X Factor" is worth checking out. We just can't wait to see Britney during the live shows!

The show premieres tonight at 8pm on FOX.

Come back to toofab at 5pm PT/8pm ET to follow along live!