The 2012 Toronto International Film Festival not only showcased the newest films, but some of the hottest fashion. Hollywood celebs channeled New York Fashion Week by strutting the red carpet runway in designer names and couture. They showed off some skin in sexy sheer, backless and drop-neck line dresses. Take a look at the some of the best looks of the festival: 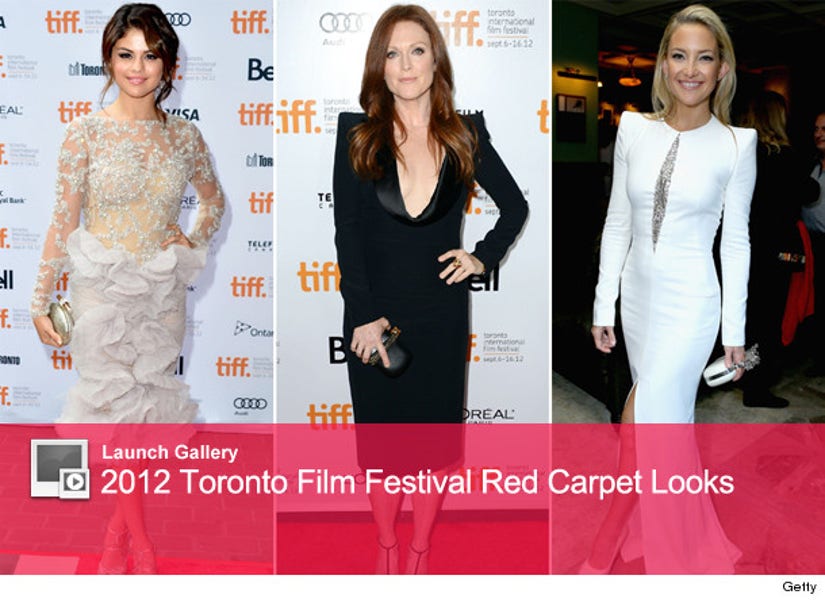 Nothing says red carpet glamour than some sparkle and skin. Kate Hudson (above right) pulled off this white Alexander McQueen gown with matching snakeskin knuckle clutch. This look does red carpet right with sexy slick lines and just the right amount of sparkle. It's very Marilyn Monroe-esque with a modern twist.

Selena Gomez pulled off sexy sheer in a Marchesa dress from the spring collection. The cocktail dress was just the right amount of beading and ruffles. The lilac color was an elegant decision on behalf of the designer; any other color would remind us of "Toddlers and Tiaras." This look really elevated the 20-year-old -- she looks like a true Hollywood star instead of an emerging starlet.

This isn't the first time Julianne Moore went risque on the red carpet. The starlet turned heads again in Toronto with a sleek black Alexander McQueen dress with plunging neckline. A fan of the sophisticated black wear, she completed the look with a McQueen skull clutch and Christian Louboutin t-strap heels.

With all the show-stopping red carpet looks, who can forget the Hollywood hunks?! Ryan Gosling sported a striped chocolate brown Gucci suit. We love this '60s-inspired look and the great mix of texture and color. Alexander Skarsgard also couldn't resist wearing the Italian designer. He looked dapper in a sleek black Gucci suit. Just like Ryan, he opted for no tie and a high buttoned collar shirt. They both steered away from a razor and kept the manly scruff. Are we approaching No-shave November already? Maybe it's just a coincident, but the actors' scruff and no tie look seem to bring a twist to men's red carpet wear.