Sunday's Primetime Emmy Awards was full of jokes, but these moments had us laughing out loud.

All of the "Modern Family" adult actors earned Emmy nominations (with Eric Stonestreet and Julie Bowen winning in their respective categories), but child actress Aubrey Anderson-Emmons -- who plays Cam and Mitchell's daughter Lily -- had her moment to shine in this hilarious skit.

Watch as she terrorizes the entire cast, and keep an eye out for a cameo from "Hangover" and "Community" star Ken Jeong!

Melissa McCarthy presented the Outstanding Lead Actor in a Comedy Series award alongside Mindy Kaling. While Mindy read each nominee's name, Melissa added her own unfiltered commentary on each of the actors. Eventual winner Jon Cryer got especially hot under the collar. Check it out:

It seems like the whole world was rooting for Amy Poehler to win her first Emmy for her hilarious turn on "Parks and Recreation," even winner Julia Louis-Dreyfus?

Julia and Amy had "accidentally" switched acceptance speeches for the Lead Actress in a Comedy category, and when the mistake is corrected, Julia's blurts out a new unexpected line thanks to the mix up.

Maybe it was the excitement from winning, maybe it was the pregnancy hormones, but when Claire Danes took the stage after winning Outstanding Lead Actress in a Drama Series, she didn't hold anything back. When's the last time you heard "baby daddy" uttered during an acceptance speech? Holla!

Jimmy Kimmel did a fine job as host, but Ricky Gervais killed it in the short seconds he had presenting two normally drab categories. Can we get him to host every awards show from now on?

Click "Launch Gallery" below to see even more moments from the show. What were your favorites? 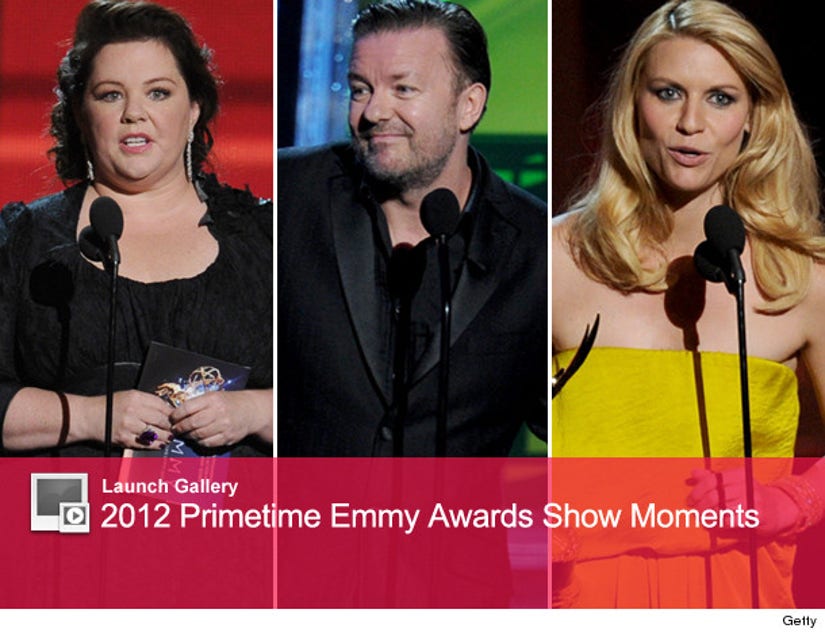